Taking advantage of the plus sides of a K through 12 campus, Haldane has pioneered a new program this school year, pairing selected and trained upperclassmen with small groups of eighth-graders one period every other week in sessions that troubleshoot issues pertinent to those on the threshold of high school.

Building upon the Second Step curriculum introduced in elementary school, Elementary/Middle School Principal Brent Harrington came up with the idea of having the program “taught to eighth-graders by high school students just three or four years older than those they are teaching.” (In sixth grade the homeroom teacher is responsible for teaching it, while in seventh it is part of a quarterly rotation of subject areas.)

He explained: “We were looking for a way to bridge our eighth-grade students’ transition to high school while ensuring a fully articulated K-8 character education program. The opportunity to take advantage of our exceptional high school students seemed like a natural fit.” 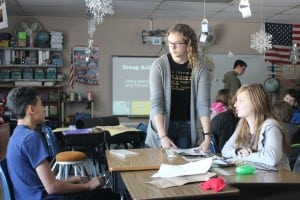 Harrington’s been pleased with the results thus far: “Our high school mentors have been incredibly dedicated and enthusiastic about this new program, and as a result, we are already hearing positive feedback from our eighth-graders.”

The Second Step curriculum, described as designed to instill “social-emotional skills” through a combination of stories, activities, videos and music, has a different curriculum for each grade, built upon earlier iterations of it, with 20 lessons each year for elementary levels and 13 for middle school. Those for eighth grade include empathy, bullying prevention, conflict management, making positive choices and goal setting.

Haldane school psychologist Tara Rounds, who, along with high school guidance counselor Kristen Sautner and prevention specialist Deanna Murannelli, is overseeing this initial running of the peer-mentoring program, said the program “lends itself nicely to having a structured experience.”

Harrington said that having it as a credited course for high school students ensured “a certain level of commitment, while having these three staff members oversee the program made sure we had the “right people on the right seats on the bus.”

Murannelli, Rounds and Sautner worked with 20 juniors and seniors for a couple of months prior to the program beginning, laying the groundwork and discussing how it should be implemented. Now that the program is running, they meet with the mentors once every other Friday, during lunch period, alternating weekly with the mentoring sessions.

The mentors watch the videos and go over the planned questions and activities ahead of time. Sautner calls the selected high school students “mature leaders we can fully trust with this material and knowing the boundaries, working with eighth graders.”

The program overseers feel that both age groups benefit from the pairing. Getting to know two or three high schoolers makes the entry into high school less intimidating and gives the eight-graders a connection once they get there. (Generally, three high schoolers work with about 10 eighth-graders; there are seven separate groups going at a time.)

The older students benefit by gaining experience in managing a new situation, in communicating ideas and public speaking and in refining their own views on these topics, many of which are still relevant in high school.

In recruiting candidates for the mentor positions, Sautner mentions the program to all 10th- and 11th-graders during her yearly scheduling meeting with them. She makes sure that each potential mentor is ready to give up a whole year’s worth of Friday lunch periods and that, indeed, they are ready to make a full commitment for an entire year, the year that follows. They then apply to be mentors.

At one recent session, mentors Addie Westerhuis and Michael Bentkowski, joined part way through the session by Marissa DiPalo, all juniors, discussed bullying among friends. Westerhuis addressed the younger students with as much command as an adult teacher, explaining that this “lesson” was designed to give them the skills to work together and how to deal with conflict. She said the suggested techniques would be helpful in all facets of life.

Video footage of actual eighth-grade counterparts describing what had happened to them was projected onto a screen where the mentors could stop and start it easily, pausing to say things like “Define the word ‘bullying’” and “How do you think it feels to be in that situation?” She then asked them to consider the differences between bullying and teasing. Westerhuis had no difficulties countering a somewhat flippant response to one student and telling another group to “Please be on task.”

As always, an adult, in this case Rounds, was in the room, observing and stepping in when needed, but more often holding back and letting the mentors manage the situation. “As an adult, I wanted to say something at times, but I intentionally didn’t, and sure enough, Addie addressed it,” Rounds said.

Meanwhile Bentkowski spoke softly but firmly to a table of two resistant to giving responses, telling them, “Sharing your different solutions can expose you to a different way of thinking.”

All in all, the team of three mentors grappled with the usual span of tuned-in and tuned-out, hands up in the air excitedly to answer questions versus some fooling around that every middle school teacher deals with multiple times a day.

DiPalo, who said that she was considering teaching as a career, said she loved peer mentoring. “It puts things in perspective and shows you how much work teaching really is,” she said, noting that it was really different from some one-on-one tutoring she had done previously. Westerhuis concurred, adding, “Learning to manage a class, you understand how teachers get frustrated.”

Asked how it felt to adhere to the structure inherent in this program, Westerhuis said there was still flexibility. “If it gets off track and it’s in a productive way, we’ll go with it, so it’s not inhibiting … We try to get their own personalized experience and not just formulated answers.” Westerhuis hopes to continue as a mentor next year.

Eighth-grader Olivia Olsen was intrigued by the program before it began. “I was curious about what it would be like, and I was excited to talk to high schoolers and get insight,” she said. Olsen was glad that high schoolers were the facilitators. “It’s harder for adults to relate to people my age, and with high schoolers, it’s easier for them to remember.”

Olsen called the program itself “good, but some of the situations they raise are very unrealistic; it would be better if it was a little more relatable.” Still, she aspires to become a mentor herself in a few years. “It’ll be fun to be at the other end,” she said.