Vote to be included on Haldane’s May ballot

Cold Spring’s Julia L. Butterfield Library is seeking approval for $73,150 in additional funding in a May 19 referendum.

Library Director Gillian Thorpe told The Paper that the increase is needed because in 2014 library expenditures totaled $368,088 while revenues amounted to only $310,625 — resulting in a $57,463 deficit. The shortfall was partially offset by $15,000 in fundraising, and the library borrowed against its endowment “to get to January 2015,” Thorpe said. 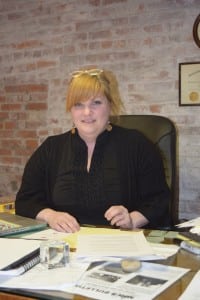 Financial support of Philipstown’s two libraries — Butterfield and the Desmond-Fish Library in Garrison — has become more complicated, and higher-profile, in recent years.

Historically, the bulk of Butterfield Library’s operating budget has come from the Town of Philipstown, an amount that for several years totaled $125,000. Things changed substantially in 2006 when the library went directly to voters and, in a binding referendum, received approval to increase Philipstown’s annual support to $276,000, a decision that was upheld by the New York State Supreme Court when the town protested.

Under New York State law the town cannot reduce the annual allotment. Any increase in that funding would require another referendum.

This time around, however, the vote on whether or not to increase funding will not include all Philipstown taxpayers. Instead it will be conducted in concert with the May 19 Haldane budget vote with only residents living within the Haldane Central School District taking part. The library referendum will be on the same ballot but is completely separate from the school vote and will have no impact on the school budget or potential school tax rebates.

However, if the library referendum produces a “yes” vote, the school district would be responsible for collecting the funds on behalf of the library. Philipstown residents outside of the Haldane School District — in Garrison and Continental Village — would not be taxed as part of the Butterfield proposal.

The Desmond-Fish Library used the same method to secure approval for $75,000 in additional annual funding as part of the May 2014 Garrison Union Free School District budget vote. In that case, only residents within the GUFS District were subject to the additional tax. Cold Spring and North Highlands taxpayers were not.

The Butterfield Library is required to submit a petition to the Haldane Central School District that includes at least 25 signatures in order to have its referendum placed on the May ballot. Thorpe said that 57 signatures have already been gathered and the petition submitted.

Cost would be $27 per household

“We asked for $276,000 in 2006 because that is what we needed for core services at the time,” Thorpe said. She said that at the time she thought a request for a subsequent increase would probably be made “in three or four years.” Instead, the library has gone nine years with no increase in core funding.

“We fought hard to secure baseline funding from the town,” Thorpe said of the 2006 referendum, adding that because residents within the Haldane School District “use us more,” she feels that in May “it’s fair to ask a little bit more per household” within the school district, rather than all Philipstown residents. 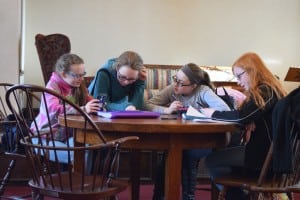 Thorpe said that if the referendum passes, the average cost per household would be roughly $27 or “about the cost of one hardcover book.” While school districts can go to the voters a second time if a budget referendum fails, the library cannot, although it would be able to hold a referendum again a year later. “If the community doesn’t want to support [the library] at a level to maintain current services then we’ll have to look at where to cut.”

Thorpe, the library’s only full-time employee along with 10 part-time staff, said that the 2006 funding increase resulted in significant improvements, many of which were suggested in user surveys. The funds made additional staffing possible. Library hours were expanded by nine hours per week, including opening on Sundays for the first time and more than doubling Saturday hours.

The number of computers available to patrons increased from two to more than a dozen. Internet access and the library website were also improved. Free access to Ancestry.com was added along with passes to such sites as the Museum of Modern Art and Museum of Natural History in New York City as well as the Norwalk Aquarium. Programs offering training in CPR, defensive driving and babysitting were made available at affordable prices. 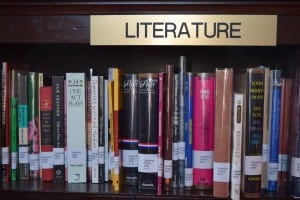 Book acquisitions have decreased due to spending cuts in recent years.

“The library’s philosophy is to make programs available to everyone in the community,” Thorpe said.

Things went very well for about four years, but Thorpe said that the recession soon began to take its toll. Costs continued to increase while revenue remained the same. “And we kept attracting more users than ever,” she said. Items borrowed by Butterfield patrons through the interlibrary loan service went from fewer than 350 requests in 2000 to more than 15,000 requests for materials in 2010. Circulation during the same period increased more than 700 percent.

In recent years the library has had to tighten its belt. Maintenance, including landscaping and carpet cleaning, was reduced. Book acquisition was cut by 50 percent and program spending by 60 percent. One staff position was eliminated. High-speed Internet access was replaced by a free but much slower service. The pace of replacing what are now aging computers slowed. And at a time when libraries are more and more technology-based, Thorpe said she is concerned about having funds to provide consistent staff training. When technology has been improved, it has not been cheap. Two Apple computers purchased recently cost $1,200 each. 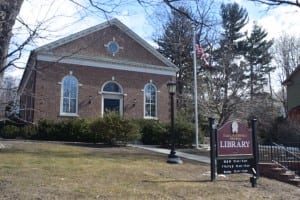 The Butterfield Library in Cold Spring

“Our board of directors has been saying that we can’t go on this way for about the past two years, that we have to go to the community,” Thorpe said. Butterfield Library is overseen by a five-member board: President Judy Meyer, Vice President Dennis Gagnon, Treasurer Michael LaRocco and Secretary Pam Markano. One seat is currently vacant due to a recent resignation. Commenting on the proposed funding request Meyer said, “We have tried to keep it realistic.”

In addition to annual funding from the Town of Philipstown, Butterfield Library also receives an annual contribution from Putnam County, which although not a guaranteed or fixed amount, totaled $32,867 in 2013. Other revenue that year included $14,568 from library fundraising; $9,786 from dividends and interest; $7,176 from the Friends of Butterfield Library; $7,010 in donations; $2,308 in miscellaneous grants; and $1,108 in fines. Fines are no longer levied for overdue material.

Asked if she is confident that the library will receive a “yes” vote in May, Thorpe said: “We’re hopeful. We feel we’ve done a really good job in the community and that people like our services. But this gives people a chance to vote and to speak their mind.” Thorpe said that 57 of the 66 libraries in the Mid-Hudson Library system have received funding through a public vote.

Public hearings on the funding proposal will be held at Butterfield Library on Wednesday, April 22, at 7 p.m. and Sunday, April 26, at 3 p.m. Background information on the referendum, including audit and annual reports, is available at butterfieldlibrary.org.