Delivering her 2015 State of the County Address, County Executive Maryellen Odell last week defended Putnam’s refusal to share sales tax and reveal gun-ownership data and highlighted the Butterfield project in Cold Spring as one of four ventures backed by her administration as a partner in economic development.

In her March 12 appearance at the Putnam County Golf Course, she also discussed final 2014 county finances. 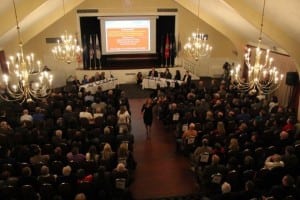 Maryellen Odell presents the State of the County address on March 12.

Like Odell’s 2014 address, this year’s, an hour and 13 minutes long, consisted of a PowerPoint slide show augmented by extemporaneous comments. Also as in 2014, this year’s talk featured a theme — the “Year of the Family,” with the oft-repeated slogan, “Putnam County Is Family, Family Is Everything”; last year it was the “Year of the Senior.” 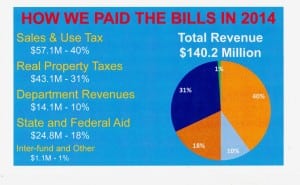 The State of the County presentation showed where the money came from in 2014.

State and federal governments “hand us a bill for 75 percent of our budget but they give us 18 percent,” Odell said, again protesting unfunded mandates — programs and obligations imposed on lower-level jurisdictions — long a county complaint. According to Odell, mandates include various social service programs ($17.5 million), Medicaid ($10 million), the county jail ($10 million) and some school costs ($7 million). 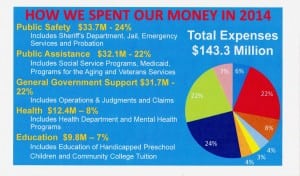 A chart in the State of the County presentation showed Putnam expenditures in 2014.

Odell responded to frequent municipal criticism that unlike most counties, Putnam does not return a portion of sales tax to the town or village where it is collected. “If the argument is going to be that we don’t share, I would argue that we do,” she said. As examples of “county sharing” of sales tax, she listed $3.2 million for community college charges that “we took off the towns’ backs”; $25 million the county “floats in bonds so your budgets don’t have a hole in them” from unpaid property taxes in Putnam’s 10 school districts, six towns and three villages; and $900,000 for the Help America Vote Act.

She did not explain her inclusion of the Vote Act, a law that launched a national initiative, with federal funding, to improve election access and voting machines.

Odell also said that of the 8 3/8 percent sales tax, the county gets 4 percent, the state takes another 4 percent, and 3/8 percent goes to the Metropolitan Transportation Authority, which runs the Metro-North commuter railroad.

Odell included Butterfield in a quartet of significant pending projects undertaken by “our partners” in economic development. She described the four as endeavors “promoting smarter economic growth and development in Putnam County” and an opportunity for “getting union families on these jobs and back to work.” Butterfield also is important, she said, “so the ‘west coast’ can have the services they’ve been underserved [with] for so, so very long.”

Stretching eastward from the Hudson River, Philipstown has been nicknamed the “west coast” by county officials. Odell proposes to place some county offices at Butterfield. Because the redevelopment is being undertaken by a private-sector corporation, how many labor union members might end up working on its construction remains unclear.

One PowerPoint slide urged “Repeal NY SAFE, the SAFE Act,” New York’s 2013 gun-control law, and Odell said her administration persists in challenging a court order to disclose public records on handgun ownership by residents who did not invoke a SAFE Act provision and “opt out” of disclosure. The Journal News requested information on gun owners who did not seek confidentiality, and the paper sued the county when it refused to divulge it.

Putnam County lost a lower court ruling, filed an appeal with the Appellate Division and awaits that decision. “We are committed” to carrying on with the effort “should the court rule against us,” another of Odell’s slides announced. In ad-libbed remarks, she emphasized the point: “We will continue to fight and defend the Second Amendment.”