Another youth succumbs to heroin addiction

The sadness is always deeper when death claims a young person. No one is supposed to die in their 20s. The intense sadness that filled the Parish Hall at St. Mary’s Episcopal Church in Cold Spring on Wednesday evening (April 1) was palpable as hundreds came together to mourn the loss of 22-year-old Logan Flood.

The sadness overflowed to the sidewalk outside where many waited quietly to pay their respects because the hall was filled well beyond capacity. Flood died on March 27, losing his battle with heroin addiction, a disease that has become all too common both locally and nationally. 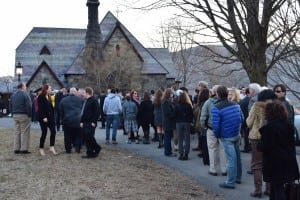 Many had to wait outside the parish hall at St. Mary-in-the-Highlands Church, which was filled beyond capacity as hundreds came out to mourn the loss of Logan Flood. (Photo by M. Turton)

The brief memorial included remarks from those closest to Flood, including his mother Kathleen Pemble, his father Charlie Flood, and his brother Gilean. Pemble was very direct, making an impassioned plea for drug addiction to no longer be swept under the rug. In her comments, and also in an interview with CBS Television, which covered the memorial, she recalled attending a funeral with Logan just six weeks ago. It was the funeral of yet another young man who had died of a drug overdose.

While at that funeral, “Logan pointed out all of his peers from high school. He said, ‘Mom, every kid in this room I went to high school with is a heroin user,’” she said. “It’s so much more common than anyone can believe.” 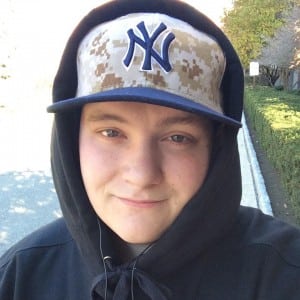 Logan attended Haldane High School for a time but graduated from Peekskill High School. Pemble pointed out that her son came from a family that had the means, through medical insurance,  to get him the best treatment possible.

But it wasn’t enough. She said that even in a loving family and in a supportive community, addiction is the issue. Logan’s father, a recovering alcoholic, wondered aloud why he was able to overcome addiction at age 21, while his son was not.

Patricia Flood, Logan’s aunt, spoke with The Paper about her nephew. “He struggled so hard. When he was sober he was a wonderful, shining spirit,” she said. “He was like a big, giant teddy bear. When he hugged you, you felt every ounce of his love.”

She commented that addiction is genetic and that Logan had two strikes against him, because it has been present on both sides of the family. “He really, totally wanted to be sober,” she said, adding that he had been in rehabilitation several times over the years. “But he told me that every time he came out of rehab, it got harder and harder.”

Logan Flood was an organ donor. Anyone wishing to honor his life can make a donation to donatelifeny.org.