But no other county offices

A leading Putnam County Legislature committee Monday night (April 13) endorsed county plans to create a senior citizen center in leased space at the Butterfield redevelopment, without establishing other county offices there. Until recently, county officials had proposed providing an assortment of county services — not merely a senior center — in Cold Spring.

The 3-0 vote by the Physical Services Committee sends the senior center proposal to the entire nine-person legislature at an upcoming formal monthly meeting. However, the six legislators not serving on the committee attended the Physical Services meeting and voiced informal consensus backing the center. That suggests forthcoming pro forma approval and that the venture is close to a done deal. The legislature’s next formal meeting is scheduled for May 5.

“I think we’re all on board with the senior center over in Cold Spring,” Legislator Roger Gross, who is not on the committee, said from the side of the room where the non-committee members sat.

“This is the opportunity,” said Legislator Carl Albano, who chairs both the Physical Services Committee and the full legislature. “I think it’s a good idea to move forward.” 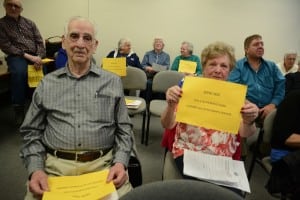 Responding to a question at the end of the meeting, he confirmed that the anticipated county quarters would contain only a senior citizen center. “This opportunity is in front of us, and the space we have would work well for the seniors. There’s nothing on the table as far as other services,” Albano said. “It’s not in the plan at this time. But we did recognize that a multipurpose room would be a good idea,” for general civic use when the senior activities are not underway. (Preliminary floor plans show such a room.)

Some 19 months ago, County Executive MaryEllen Odell offered a different perspective. Writing to the legislature in September 2013, Odell stated that she foresaw establishing a multifaceted county presence at Butterfield, providing branches of the Departments of Motor Vehicles and Personnel, the county clerk’s office, the tourism office and the Economic Development Corp., “as well as a modern senior center for Philipstown, Nelsonville and Cold Spring residents onsite.”

On Monday, county officials who presented details to the committee pegged the cost of establishing the senior center at $850,000 and the total outlay for internal construction, operations and rental occupancy over 15 years at $3,428,950. They also anticipate gross county tax income from the Butterfield redevelopment of $1,157,068. Philipstown resident Roger Ailes has pledged a $500,000 donation toward the senior citizen center.

Odell’s administration is negotiating with Butterfield LLC developer Paul Guillaro, who is building the complex, and did not make public a draft letter of intent providing details of the senior citizen project, although the legislators were privy to it. Deputy County Executive Bruce Walker told The Paper after the meeting that they had withheld the letter because various points in it are still being discussed with Guillaro. 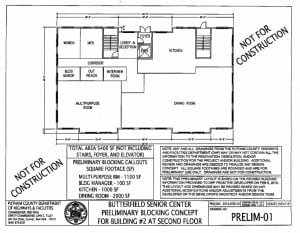 A preliminary floor plan for the proposed senior center.

Fred Pena, commissioner of the county Department of Highways and Facilities, provided the committee with a draft floor plan for the center, intended for the Butterfield structure dubbed Building 2. He noted that details of such components as the heating and air-conditioning system, electricity and plumbing were being ironed out with Guillaro.

“We feel pretty comfortable with that number” of $850,000 for the costs of finishing the interior space for county use, he said. “Obviously, the approval to move forward will have to come first,” before everything gets firmed up.

Walker said the county expects to pay $12.95 a square foot for 6,000 square feet. According to the information he supplied, renting space would be more economical than owning it. While the county expenses for Butterfield would top $3.4 million, for the same period the costs of county-owned senior citizen centers in Putnam Valley and Mahopac are projected to be $5,929,913 and $5,186,440, respectively. “It was important to understand what the real annual impact would be,” Walker said.

“Someone is building this building,” said Legislator Barbara Scuccimarra, another non-committee member, who represents Philipstown in Carmel. “It’s going to be ready to go and we’re going to take advantage of it. There’s nowhere else in Cold Spring we could do this, and we certainly don’t have millions of dollars to build from scratch. This the best opportunity we have and we don’t want to miss out.”

During the meeting, project advocates, mostly senior citizens from Philipstown and beyond, held signs urging the committee to approve the proposal.

Pat Sheehy, director of the county’s Office of Senior Resources, said that considering the aging of the baby-boomer generation and the years in which in Philipstown’s elderly have gone without an adequate center, “we really can’t afford to wait much longer.” (The county currently runs a lunch service in Cold Spring at the American Legion in make-do space.) “It’s wonderful that we have a vote that is going to move us forward,” Sheehy said.

Cold Spring Village Trustee Cathryn Fadde also extended her appreciation to the committee. “We really do need something” for seniors in Philipstown, she said.