Putnam County wants to take 5,000 square feet in an intergovernmental office building at the planned Butterfield Hospital redevelopment in Cold Spring and anticipates post office quarters at the complex as well, according to a letter from County Executive MaryEllen Odell to the leader of the County Legislature.

“The county has a very real interest in leasing approximately 5,000 square feet of office space within developer Paul Guillaro’s Butterfield site,” Odell wrote Sept. 5 to Legislature Chairman Richard Othmer. “By doing so, we could bring much needed and long overdue services to the western side of the county. I am writing to the Legislature stating for the record that I fully support having the county lease space on the Butterfield site.”

Included in materials given to members of Legislature’s Physical Services Committee at a meeting Monday night (Sept. 16), her letter prompted no debate. After the meeting, District 1 Legislator Barbara Scuccimarra provided a copy of the correspondence.

Meanwhile, State Sen. Terry Gipson, who recently received a briefing from Guillaro at the Butterfield site, expressed positive comments about the project in a Sept. 11 letter to Odell and the Legislature. Gipson mentioned the possibility of state grants and other funding to upgrade street infrastructure and for government consolidation efforts involving Butterfield.

In her letter to Othmer, Odell said that in the county space at Butterfield she foresees putting branch offices of five agencies: the Departments of Motor Vehicles and Personnel, the county clerk’s office, the tourism office, and the Economic Development Corp., “as well as a modern senior center for Philipstown, Nelsonville, and Cold Spring residents on site.”  Regarding the latter, she added: “As you know, local resident Roger Ailes has graciously agreed to donate his Bradley Prize of $250,000 matching it with family funds for a total of $500,000 to be used for the new senior center.”

However, Ailes, who won the Bradley honors earlier this year, has been exploring the feasibility of using the American Legion building on Cedar Street to house an upgraded senior citizens center.

Along with the county branch offices, Odell advised Othmer that she also hopes that the Northern Westchester Women’s Resource Center might take space at Butterfield, given its interest in expanding its services to Putnam County. 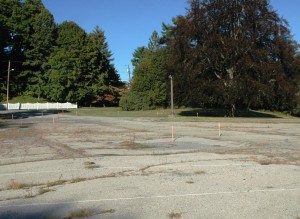 Fresh stakes marked outlines of buildings at the Butterfield property this week, prior to a village Planning Board visit.
Photo by L.S. Armstrong

At the Butterfield site, Guillaro plans to build retiree-age condominiums, an intergovernmental headquarters with room for a post office, three single-family homes, and a retail-commercial square, saving part of the existing lawn as a “Gateway Park.” To move ahead, he needs to get the Cold Spring zoning code changed to accommodate his mixed-use complex.

Odell referred in her letter to a meeting that brought together representatives of Rep. Sean Patrick Maloney’s and Sen. Gipson’s offices, Cold Spring Mayor Ralph Falloon and Trustee Bruce Campbell and village Planning Board Chairman Barney Molloy, Philipstown Town Board Member Nancy Montgomery, and county leaders to discuss the fate of the Cold Spring post office, now scheduled to lose its lease at the end of November. To help save the post office, a Maloney aide recommended letters of support from public officials for the Butterfield project, Odell noted.

Odell told Othmer that she believed the Cold Spring Planning Board would take up details of Guillaro’s plan Sept. 18, “and the Butterfield project would move forward in a timely manner. In addition, it is my further hope that when the time comes, the Legislature will extend its full support for this important and much needed project.”

She sent a similar letter to Maloney, supporting the Butterfield redevelopment.

The Cold Spring Planning Board scheduled a visit to the Butterfield property for Sept. 18. Fresh stakes marked features of the site a day in advance.

In his own letter, to Odell, Gipson said that visiting Butterfield “gave me a better appreciation of the scope of the project and the impact it would have on the community. There appears to be many aspects of this project that fit with my goals of building strong communities, creating jobs and lowering the cost of living for the people of Putnam and Dutchess Counties.”

And the state could perhaps help, he suggested. “I want to point out that there are state grant and funding opportunities that could help upgrade the sidewalks/crosswalks, parking and traffic flow along Route 9D,” Gipson said. “In addition, if desired by the village and town officials, the project may qualify for municipal consolidation grants.” He sent copies of his letter to all members of the Cold Spring Village Board and the Philipstown Town Board, as well as to Odell and county legislators.