By a wide margin, voters in the Haldane Central School District approved $22,879,325 in total spending for 2015–16, a 2.72 percent increase in the tax levy, in the referendum held on Tuesday, May 19. The new spending plan garnered 667 “yes” votes to just 259 opposed. A separate spending proposal to augment the district’s fleet of buses was also approved by a 631 to 291 margin.

In a trustee race that featured six candidates for three positions, incumbent Evan Schwartz was the big winner with 485 votes. Newcomer Margaret Parr was second with 462 votes, and Peggy Clements, another first-time candidate, will round out the new board, receiving 436 votes. As the third-place finisher, Clements will serve the remaining year in outgoing district President Joe Curto’s term, taking over immediately as trustee. Schwartz and Parr will both serve three-year terms. 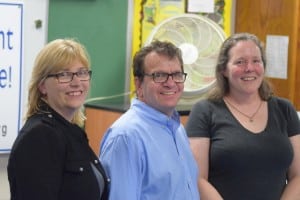 Elected as Haldane School Board trustees were newcomers Margaret Parr (L) and fellow first-time candidate Peggy Clements along with incumbent Evan Schwartz who earned the most votes overall.

Tuesday evening’s other big winner was the Julia Butterfield Library. Voters approved the library’s request for $73,150 in new funding. The library funding referendum was unrelated to the Haldane budget but appeared on the same ballot because public libraries come under the auspices of the New York State Department of Education.

In Garrison, voters in the Garrison Union Free School District also approved the proposed 2015–16 budget, giving the green light to a spending plan totaling $10,201,153 by a vote of 185 to 51. In the election of trustees, three seats were open with three candidates running unopposed. Incumbent Ray O’Rourke received 211 votes while David Gelber received 175 and James Hoch 168.

Haldane trustees held an abbreviated meeting prior to the 9 p.m. closing of the polls. It marked the last session for Curto, the long-serving School Board president. Vice President Jennifer Daly praised him: “I felt like he took me under his wing … I learned so much. Joe’s legacy is that he touches every person he works with.”

Curto later returned the favor, encouraging the current board members and candidates who were present to vote for Daly as the new school board president at the annual reorganization meeting scheduled for July 7.

Curto also thanked outgoing Trustee Jon Champlin, whose term ends on June 30, commenting that “John is very well respected in the community.” A major focus of Champlin’s efforts was the completion of the new athletic field.

Parr and Clements, both political neophytes, were visibly pleased with their first-time wins. “I’m excited,” Parr said. “We had a really great set of candidates … and the campaign was not controversial.” She added that updating Haldane’s Code of Conduct is one project she looks forward to working on.

Butterfield Library Director Gillian Thorpe: ’We just put the information out there honestly…’

Clements said that the election campaign “could not have been a more rewarding process,” one that enabled her to hear from members of the community about the strengths she might bring as a new trustee while also personally assessing her skills and potential contributions. “I really see my role as one of supporting the superintendent (Diana Bowers) and her leadership in determining what the school needs to focus on.”

Clements said that participating in the drafting of a new strategic plan for Haldane had increased her awareness of the broad range of issues that trustees must deal with.

Library Director Gillian Thorpe said she was very happy with the positive vote and the new funding it brings to Butterfield Library. “It means I won’t have to make cuts,” she said. Thorpe said the library didn’t conduct a telephone campaign or use other pre-referendum tactics in order to get supporters out to vote. “We just put the information out there honestly to see what the public wanted.”