Afraid of bees? Make a conservation border on the edge of your yard

While I was volunteering at the Master Gardener Plant Sale in Brewster last weekend, I talked to a lot of people about native plants that are essential for pollinators’ and other beneficial insects’ survival. Over and over, I kept hearing, “Oh no, I don’t want to plant that. I don’t want bees in my yard.” Finally, I said, “No bees, no food.”

Bees have a reputation as being mean and prone to attack. In the public view, they’re basically the sharks of the insect world. It’s an undeserved perception, though. Except for the roughly 3 percent of the population that is severely allergic to bee venom, more people die from lightning strikes, car accidents and food poisoning.

World Health Organization statistics published in the Allergy, Asthma and Clinical Immunology journal indicate that only 54 people in the U.S. out of nearly 300 million died from bee stings in 2000. You’re twice as likely to die from being kicked by a horse as stung by a bee. Bees need rebranding and they need it fast. 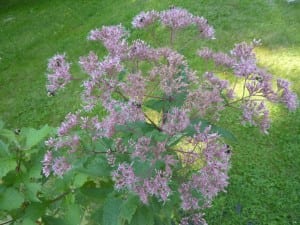 Joe-pye weed is an excellent choice for a native plant that will attract bees. (Photo by P. Doan)

The Bee Informed Partnership, a collaborative project among university and research labs, released their annual survey results last week, and beekeepers reported losing more than 40 percent of their colonies last winter. This exceeds the previous winter’s dire news when about a third of the colonies died. More disturbingly, the beekeepers reported losing even more bees during the summer months when conditions should be ideal than in the winter when conditions are harsh.

An average winter loss prior to the onset of colony-collapse disorder in the past decade would be about 10 percent. It’s been difficult to determine the exact cause behind this trend of massive die-offs. There are several factors that are commonly cited as affecting bee’s health, though. Neonicotinoids are a class of pesticides that have been widely used by commercial agriculture in the U.S., although they are banned for use on flowering plants by the European Union. Loss of habitat and food sources are also cited, hence the promotion of bee-friendly landscaping for home gardeners. Disease is also a culprit, spread by a mite.

Jennifer Stengle, the community educator for Environmental Horticulture and Natural Resources with the Cornell Cooperative Extension of Putnam County, has a lot of experience responding to panic over stinging insects and recently wrote her dissertation on beneficial insects. Stengle said: “When bees are pollinating plants, they are very low risk. It’s when you encounter the hive that the danger occurs. If you have a severe allergic reaction, then you should be afraid of bees, but really, they aren’t dangerous.”

Bees and other stinging insects like hornets, wasps and yellow jackets aren’t interested in us unless their nests are disturbed or they are antagonized. If you accidentally hit a nest when you’re digging in the garden, Stengle’s best advice was to run as fast as you can. She said, “Their job is to defend the queen, and that is what they will do by stinging you as much as they can.”

A bee that is going about its business collecting pollen and nectar from flowers doesn’t care about you. The same goes for a hornets or yellow jackets as they’re hunting aphids and caterpillars in your yard. They just want to gather food and feed their larvae.

The other fear that people have is a bee swarm. Stengle said that only honeybees swarm, and they only do it when they are trying to find a new hive. The queen takes off and the workers follow her in a formation. Stengle commented, “Our native bees don’t behave that way, and that isn’t a danger here.”

Wasps and hornets are effective pest control in the yard. Studies have shown that encouraging paper wasps to nest near farmed fields can reduce the number of caterpillars significantly, decreasing crop damage. Paper wasps make those paper-like, open-celled nests that are commonly found under the eaves or in garages.

While Stengle said that safety is the first consideration, if a nest is up in a tree out of the way or on the roof of a tall structure like a barn, the wasps will do more good than harm. Just don’t go poking at the nest, and everyone should get along just fine. There are even instructions available online on several sites for making a paper wasp nest to attract them.

Still not convinced that we can safely coexist with bees? Consider creating what Stengle calls a “conservation border.” Dedicate an out-of-the-way area of your yard for plants that will sustain beneficial insects and declare a truce.

One thought on “Roots and Shoots: No Bees, No Food”