An expanded parking permit program for village residents might soon be a reality. Trustee Cathryn Fadde reported at the Tuesday (May 26) meeting of the Cold Spring Village Board that she met recently with New York State Assemblywoman Sandy Galef, who indicated that the village’s request will go before both houses of the state legislature before the end of the current session.

If approved, the legislation will expand the existing permit program, which applies only to streets below the Metro-North railroad tracks. The extended program would include most side streets below Morris Avenue and Chestnut Street (Route 9D), exempting residents there from daily time limits on parking. Main Street, Fair Street and Depot Square will not be included.

“It’s a big plus for village residents,” Fadde said, adding that the program will allow for more meaningful application of parking regulations. Employees of local businesses who do not live in the village will not be covered by the program and will be subject to normal parking regulations. At its next meeting, the village board will consider an enabling resolution to be forwarded to the state legislature.

Local residents may soon be able to safely dispose of prescription drugs at a facility within the village, an initiative supported by the Putnam County Communities That Care Coalition and the Putnam County sheriff. Bob Ferris, a criminal investigator with the Sheriff’s Department and a village resident, suggested at Tuesday’s meeting the Cold Spring Police Department be used to house a drop box that would be available to the public at specific times when the office is manned.

A drug take-back day held at the American Legion on Cedar Street last year resulted in the disposal of 120 pounds of lapsed prescription medications. A 2014 National Survey on Drug Use found that prescription medicines are the second-most common form of drug abuse in the U.S., and health experts continually warn against keeping expired and unused prescription drugs in the family medicine cabinet. They also advise against flushing drugs down the toilet because they pollute area waterways. Mayor Dave Merandy will pursue the drop-box project with CSPD and the village building inspector.

Trustees appointed former Village Board Member Charles Hustis to the committee planning festivities for Independence Day. An advertisement for volunteers placed several weeks ago received only three responses, including former Deputy Mayor Bruce Campbell, who has organized the event in the past, and who now chairs this year’s event. One applicant who was not a village resident was rejected, and the other could pledge only a limited amount of time to the project.

Merandy expressed concern both over the modest $3,700 budget for the Fourth of July celebration as well as the lack of public response to the request for organizational help. As a result, on Tuesday Deputy Mayor Marie Early and Fadde were appointed to assist the event committee.

One of Campbell’s tasks has been to find a company to provide the traditional fireworks display. Majestic Fireworks Inc. has done so in the past but is not available on July 4 this year. In a telephone interview with The Paper, Merandy said that Campbell is currently negotiating with another company, “which may provide a better product at a better price” and is available both on July 3 and 4.

Other aspects of the event not yet finalized include the parade and live music at the riverfront. Merandy said he supports having a parade but that it should be properly organized and re-examined if “throwing something together in just three or four weeks” would produce a good result. He also questioned holding the parade in the midday heat.

Trustee Michael Bowman suggested that if the cost of extra policing is an issue that the village look to the fire police from the Cold Spring Fire Company for help. Bowman said that CSFC police have offered to assist at events in the past, but the village has never taken them up on the offer.

“It’s a game.” That’s how Benjamin Syden described the task municipalities such as Cold Spring face in trying to pry grant funding from senior levels of government in order to complete their projects. Syden, vice president of the Albany-based Laberge Group, addressed Tuesday’s meeting, pointing out that the firm was successful in 11 of the 14 funding applications it wrote last year.

According to Syden, it’s not just what you say in a grant application that tips the scales toward winning the money — it’s also how you say it. “My job is to squeeze projects into the shape that they (state, federal governments or nonprofits) want to see … whether that shape is a star or the moon.” 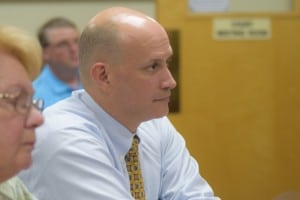 Syden said that four years ago, an individual village or town could apply for grants at the end of the year for next year but that the game has changed. Now, communities must combine forces as a region, submitting one application in hopes of tapping into pots of money under more than 40 programs administered by a variety of government agencies. The Consolidated Funding Application (CFA) sets up a statewide competition in which regions win or lose based on the strength of their applications.

While the competition is bound to be intense among the seven upstate regions, Syden said that more funds are being made available this year due to a state budget surplus and a special program for upstate revitalization. “This year’s ‘losers’ will receive more than last year’s ‘winners,’” he said.

Merandy told The Paper that he will consult with fellow board members regarding possible grant applications. The services of a consultant such as Laberge Group would come at a cost, and most if not all grants also require a local contribution. The deadline for submitting projects under CFA is July 31.

Town of Philipstown Supervisor Richard Shea attended the grants discussion along with newly appointed Town Board Trustee Robert Flaherty. In one of the evening’s lighter moments Merandy told Flaherty that he had “big shoes to fill” on the Town Board. Flaherty replaced Merandy, who resigned from that board after being elected mayor of Cold Spring in March.

Cold Spring’s desirability as a favored locale for video and film productions seems to be growing. On the heels of a recent Main Street photo shoot by Men’s Health magazine and plans for a segment of the TV series The Affair to be shot in the village later this month, trustees considered a third proposal at Tuesday’s meeting. Putnam Valley’s Secret Toy Surprise Productions has requested an all-day shoot at the riverfront bandstand on June 1.

The video deals with obesity, public health and issues related to use of refined sugar. The request was referred to the Recreation Commission to consider, including establishing an appropriate fee. Fadde suggested that a section dealing with film and video productions be considered as part of the ongoing Village Code update, a practice she said is followed in some communities.

In a May 21 article on the Village Board’s search for “fiscal efficiencies,” Philipstown.info reported that not filling a current opening on the Cold Spring Police Department and instead hiring a parking enforcement officer would result in a net savings. On Tuesday, when The Paper asked if that idea would be pursued, Early clarified, pointing out that leaving the police position vacant would not reduce the CSPD budget because the total cost of wages would not change; the same total wage cost would simply be distributed among a force consisting of one fewer part-time officer.