Donuts, gas and gum to go

After being in the works since at least 2012, Dunkin’ Donuts has opened for business in Cold Spring. Manager Carla Resendes told The Paper that the first cup of coffee was served on Sunday, May 31. Paul Sardinha of Cortlandt Manor owns the new franchise in the iconic nationwide enterprise.

It will operate alongside a convenience store and gas station owned by Syed Hussain of Port Washington, New York. All three will be open daily from 6 a.m. until 10 p.m. The property that houses the new businesses, located just north of Foodtown Plaza on Chestnut Street, was previously the home of the Elmesco Citgo service station for more than 25 years. 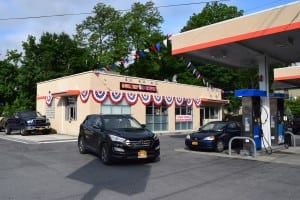 The convenience store and gas station employ three people, all of whom live locally, according to store manager Sunny Sheid. The Dunkin’ Donuts outlet has eight employees, half of whom are local residents, Resendes said. She also indicated that more staff will be hired.

Dunkin’ Donuts may well be the last “formula business” to locate in Cold Spring. In February 2014, by a unanimous vote, the Village Board approved a change to the zoning code that prohibits “chain” retail businesses, restaurants and drive-thrus. Kenny Elmes had originally proposed converting his auto repair shop into a Dunkin’ Donuts shop and convenience store in spring 2012.

In December of that year, after a detailed and at times testy review process, the Cold Spring Planning Board approved the project. That approval was the impetus for further debate in the community and ultimately passage of the local law banning other formula businesses. 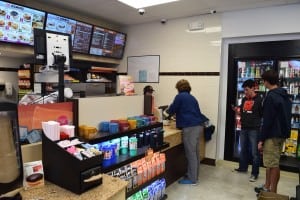 In a move that surprised many residents, Elmes sold the business in June 2013. Plans for the Dunkin’ Donuts and convenience store went ahead as planned and construction began in September 2014. The gas station has remained in operation throughout the transition from service station to donut shop.

An official opening of the new businesses is planned for Sunday, June 7, at 10:30 a.m.