F2T: Described as an “irritating abbreviation” by food writer Corby Kummer in his recent Vanity Fair screed, Is It Time to Table Farm-to-Table?, this perfectly legitimate and once honorable culinary movement now has an annoying acronym to call its own.

To this eater, cook and householder, farm-to-table has unfortunately come to effectively represent an unctuous hipster pretention more-than-likely coupled to a higher price tag, justified by pinpointing a dinner’s ingredients down to their latitude and longitude, degrees and minutes, the farm and farmer’s name, the farmer’s children’s names and the names of all their pets. Call it marketing. That’s polite. It’s smacks of terroir-ism.

What “F2T” strives for and what we want from its ideal is a nebulous authenticity that hovers around an ethic of conscious and mindful living and consuming, only hinted at by words like “seasonal” and “local.” What we want is food that is minimally processed, responsibly and ethically sourced and prepared — but most important, tasty.

This was all driven home recently as I had the opportunity to partake of a genuine “table-on-the-farm” feast: Glynwood’s June 4 Farm Dinner. Admittedly, it was a bit early in the season to take full advantage of summer’s harvest (that would be more likely in the July and August dinners; details below) but the evening began with some surprisingly toothsome Glynwood charcuterie and Hudson Valley cheeses, and the dinner itself kicked off with an appetizer of Glynwood-raised, house-smoked goat accompanied by a jalapeno slaw.

The menu was prepared and executed by Glynwood Executive Chef Jodi Cummings. Cummings was herself born and raised locally (in Marlboro, New York) and schooled at the Culinary Institute of America in Hyde Park. While she earned her kitchen stripes in NYC, Connecticut and the Hudson Valley, her cooking is foremost informed by a valley native’s love and appreciation for its foodways and farm culture.

For this Glynwood dinner, there were no “fancy” preparations: In accordance with seasonal al fresco dining and cooking, the descriptors, techniques and tastes leaned heavily toward a woodsmoked Mediterranean axis consistent with the actual culinary revolution responsible for the F2T phenomena (Alice Waters, Chez Panisse et al.).

Cummings’ creative contribution and commentary consisted of sympathetic-yet-unexpected spicing and seasoning: the most commented upon dish of the evening was our second course — charred romaine lettuce with crumbled blue cheese (specifically, Old Chatham Ewe’s Blue) with a red onion relish (surprisingly seasoned with sumac) paired with grilled brochettes of rib-eye “dressed” with a spring charmoula. This particular preparation was a direct popular hit, but it is also an eminently versatile and easily adapted recipe, completely emblematic of Cummings’ philosophy and process.

Charmoula, (aka chermoula or chrmla) is a traditional North African sauce used to marinate and/or flavor, meat, seafood and vegetables. It’s basically an herbal paste (not unlike pesto, albeit without the cheese) centered around an herbal base of cilantro and parsley. On the day I spoke to her, Cummings was organizing a potluck supper and demonstration for Glynwood’s CSA (community supported agriculture) farm subscribers.

She suggested the mixture as a superior “secret weapon” in getting the most from your CSA share, explaining its innate versatility: “You can basically use any two herbs — tarragon, oregano, dill, parsley, cilantro, mint — that play well off of each other and whatever you’re going to serve it with — vegetables, fish, chicken, other meat; let’s see — garlic, definitely … the traditional recipe calls for preserved lemons but I use lemon, or lime, juice.”

Here, the spicing leans again toward the smoky notes — paprika and cumin — flavors that mesh well with grilled foods. (Coriander, red pepper, ginger or saffron are suggested as alternatives or additions.) The recipe reproduced here can be used as a rub or marinade for meat, seafood and substantial vegetables like eggplant, cauliflower or portobello mushrooms. Thinned with a bit of additional citrus juice, vinegar or a flavored or nut oil, it becomes a finishing sauce to follow grilling. Top the grilled vegetables off with a dollop of Greek yogurt or some goat cheese and more charmoula or stir some into a bowl of cooked chickpeas or lentils and this ready-made sauce elevates a simple vegetarian meal. 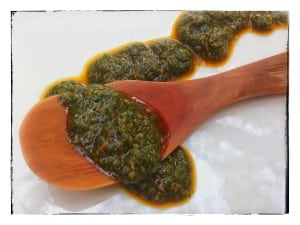 Cummings generously revealed her inspiration for the specific influence: Boston-based, James Beard award-winning chef and restaurateur (restaurants Oleana, Sofra and Sarma) Ana Sortun, guest chef at one of last year’s dinners. (Chef Sortun is also the author of the cookbook, Spice: Flavors of the Eastern Mediterranean, from which Cummings was interpreting a sweet rhubarb-rose petal jam for the CSA demo.)

“I try to take the food that comes from here, the ingredients that come from our neighbors’ farms, and let the ingredients shine — I like the dandelion greens to stand out … I want to cook the meat to the best of my abilities; give it a few accents. I try to keep things rustic and simple, but the flavor — the smell of the meat when it’s fresh … raw; the freshness of the greens; the tomatoes when they’re in season — that’s what I’m aiming for.”

And that’s how it’s really done — up on the farm.

Tickets for Glynwood’s July 10 farm dinner — a special seasonal vegetarian meal prepared by guest chef Agnes Devereux of New Paltz’s Village Tea Room and Cummings — are $95/person and are available on the Glynwood website (glynwood.org). Advance tickets are also available for the Aug. 1 dinner ($55/person), which will highlight Glynwood’s peak-season offerings. The farm dinners run through November. Glynwood is located at 362 Glynwood Road, off Route 301, east of Cold Spring.

In a food processor, combine the parsley with the cilantro, garlic, cumin, coriander, and smoked paprika. Pulse until the herbs are finely chopped. Add the lemon juice and ½ cup of the olive oil; pulse to incorporate. Add salt to taste. Thin with additional oil to desired consistency.

Note: Charmoula will keep for three days refrigerated or freezes well for longer storage and a welcomed culinary blast of summer in the colder months.