Anyone driving between Cold Spring and Beacon on a pleasant weekend has encountered them: the masses of hikers swarming Route 9D and funneling into the Breakneck Ridge trailhead, where they join up with many others who have arrived by Metro-North at its weekends-only Breakneck Ridge stop.

Even before they arrive at the trail, some of these hikers have put themselves, and those they encounter, drivers among them, at risk, often ambling north and south on 9D five or six abreast, not looking ahead or behind them, some climbing onto guard rails from which they can easily tumble into the path of a car. Yet it’s when they reach the trailhead that some, usually the more inexperienced, put themselves in the greatest jeopardy.

The popularity of the steep ascent is much highlighted online, often without the necessary accompanying warnings about the difficulty of the climb, instead focusing on the magnificent views and the proximity to New York City.

This produces numerous hikers who arrive wearing completely inappropriate and dangerous footwear — in many cases flip flops — without maps, water or any other provisions. 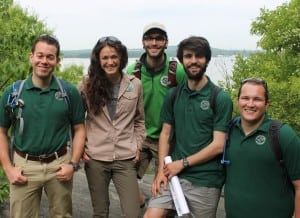 With more and more instances of lost or injured hikers a daily occurrence on the weekends, an average of one or two rescues are performed, incurring expenses to both Dutchess and Putnam counties and, in many cases, putting the safety of the rescuers in jeopardy. With all of this as a backdrop, the New York–New Jersey Trail Conference, a nonprofit organization with a combined individual and club membership of over 100,000 people that partners with parks to “create, protect and promote a network of over 2,100 miles of public trails in the New York–New Jersey metropolitan region,” devised a Breakneck Ridge Trail Steward program, which premiered in August 2013 as a pilot, using two stewards every Saturday and Sunday. This is in keeping with the Trail Conference’s mission of organizing volunteer service projects to keep trails open, safe and enjoyable for the public.

According to Hank Osborn, the NYNJTC’s East Hudson program coordinator, the program expanded the following year to a roster of five stewards (two of whom are on duty at a time) covering the entire hiking season, Memorial Day through Columbus Day. This year has seen further growth with hopes to continue into November.

The No. 1 goal of the program is safety, Osborn said. “We’re trying to educate people so they don’t go up unprepared. Along with providing them with maps and water, we’re showing them alternate, more suitable hikes they can do if they’re unprepared or inexperienced. We evaluate their footwear and even send them to local outdoor equipment stores to purchase the right gear.”

The numbers are increasing. The trail stewards keep a count of just those hikers ascending the White Trail, and the average on a nice day is around 1,000 people; sometimes the count goes as high as 1,400 — it’s weather dependent. Overall, Osborn said, it already appears to be 200 or 300 more, each weekend day, than last year.

The program began with a request from New York State Parks to the NYNJTC, asking them to assist in finding a solution to the many rescues occurring each weekend. With private funding, assisted by donations from both Putnam County and Dutchess County Tourism, according to Osborn, the program began. When asked how locals might feel about their tax dollars supporting services given largely to nonlocal residents, Osborn said: “With more funds for this program, the number of rescues is greatly reduced, so the cost is then greatly reduced and it’s ultimately an investment in your own community. It’s also giving a better experience to thousands of tourists, which then drives them on to spend more time in the area and support local establishments. … We track how many people we’re directing into Beacon and Cold Spring and specifically direct people there.”

Breakneck Ridge’s popularity as a destination shows no signs of ebbing, despite all the online information currently out there describing the ascent as, in an example given from hudsonvalleyhikes.com: “Difficulty: 10 out of 10 (crazy steep hike), rock scrambling.” The Trail Conference has produced a video on this particular hike that has, said Osborn, “gone viral. Viral for the Trail Conference meaning it has had nearly 15,000 views; all of our others have had less than 150.”

That, too, has been successful in transmitting the message that this is not a hike for novices. “People arriving have definitely seen it,” Osborn said, adding that a “brand-new sign explaining the perils of the walk is helping, too, especially for days when we’re not here.” Osborn said the age range of typical hikers spans decades, from babies to seniors, with most hikers in their 20s and 30s. 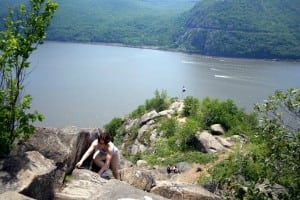 Climber on the Breakneck Ridge ascent (Photo by Audius Juskelis)

Stewards, who are seasonal and salaried, receive two full days of “scenario-based” training, involving much role-playing of different potential experiences they might have on the job. In addition to certification in Wilderness First Aid, stewards are educated on everything from how to engage people to how to use the iPhone credit card reader.

Osborn said that compliance is high. “People do listen to the advice, particularly our instructions on how to follow a trail, particularly since this is a looped trail — they need the instruction.”

Osborn is quick to note that rescues have not been eliminated, “because stewards are only on duty eight hours a day, and people are still getting lost in the dark.”

This then leads to the expansion wish list, which Osborn described as having these services at other trailheads, additional hours, a longer season, an investment in materials and upgrading to a permanent facility of some kind at Breakneck, rather than the temporary tent they currently work out of. “We’d love to have real space for all the maps, water bottles, etc., plus permanent restrooms rather than porta potties,” he explained.

To educate local residents about this program, and to present a progress report on visitor management and safety at Breakneck Ridge and the surrounding trailheads, Osborn, along with Fred Rich and local author Don Weise, will host a public information meeting and book signing on Friday, July 17, at 6:30 p.m. at Desmond-Fish Library in Garrison. Osborn will speak about the program, its impact and ongoing challenges in the area. Local resident Rich will speak about how the public can help make this program successful and how its benefits can be expanded in the local area. Rich will supply the first 50 attendees with a free copy of the book Circuit Hikes in Harriman, whose author, Weise, will be on hand to sign copies.