Faced by a standing-room-only crowd and barrage of criticism, the Philipstown Town Board Thursday night (July 9) scrapped a draft law requiring temporary permits for the holding of large events – such as fundraising lawn parties and barn dances – on private property and decided to revise the concept and try again.

The board pulled back after a public hearing on the measure, which also contained provisions regulating filmmaking. Board members had intended to vote on adopting the draft during their formal monthly meeting, which followed the public hearing. At the hearing, numerous residents objected to all or part of the proposal, citing its impact on everything from family reunions to garden club fetes to “250 people just hanging around doing a whole lot of nothing” to fire department operations. A modicum of support for some aspects of the draft law – such as oversight of outdoor music sound systems – also was voiced. 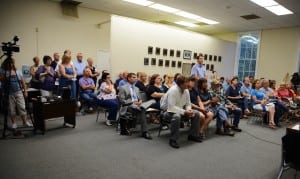 At a July 9 public hearing convened by the Philipstown Town Board, audience members listen carefully to discussion of the draft law regulating large events on private property.

As drafted, the measure required a temporary permit for any “occasion on private lands which do not have an approved site plan or equivalent approval for such use” — for example, those not established as restaurants or related venues — “and for which a fee is charged,” either to attendees or as rent for the space. Likewise, it called for a permit for any event drawing 250 or more attendees, even those charging no fee, and specified that for an event “held in a structure other than a tent, without sprinklers,” the organizers had to ensure “that a manned pumper-tanker [fire] truck will be on-site during the event.”

Currently, no mechanism exists in the town code for non-profit institutions or individuals with land or picturesque old buildings to host occasional fundraising dinners, picnics, dances, or lawn parties, or rent their meadows for weddings. Lacking other recourse, the town government issues parade permits, even when no parade occurs, for such events.

Supervisor Richard Shea explained that the draft law was “intended to try to assist these institutions and individuals. It’s not an attempt to overburden people or put more regulation on,” he said. “I don’t want people to start with the perception that this is some kind of overreaching by government.” He also said that “safety is one of the aspects of it” and that the town government wants “to assist people holding large events while making sure that the events are going to be safe.”

“This is really geared for organizations that have a structure that doesn’t meet code presently because of the historic value,” said Councilor Nancy Montgomery. “We’d like to help them meet code and offer them an opportunity to use their properties for organizations like the Haldane School Foundation. We’re trying to help the properties that do one-off events. For the most part, these events are enhancing our community.”

At the hearing, some audience comments – about mass holiday festivities, a picnic held by a village church or filming of a Haldane graduation or athletic game – seemed to mix up the Town of Philipstown with other legal jurisdictions. Cold Spring and Nelsonville have their own laws and school district policies can govern some activities on school property.

The proposed town law “does not apply within the villages,” Councilor John Van Tassel noted.

Some like a Fourth of July celebration, with its “really large crowds in the village – that’s outside of our purview. That would be a village issue,” Shea said.

Impact on individuals and institutions

Various speakers called for more differentiation between events organized by non-profits, as opposed to profit-making enterprises; more awareness of attenuating circumstances; distinctions between those who hold one to three events a year and those who conduct them frequently on a recurring basis; more attention to size, and avoidance of unwarranted restrictions.

Kim Conner asked that the law recognize that some groups, such as the local Democratic Party, seek donations at events, rather than charging a set attendance fee; she also recommended an appropriate “threshold for the number of people, so we don’t end up with Woodstock here.”

Dave Vickery cautioned that a law might end up foisting more obligations on the town government and increasing liabilities for the town and its residents while taking the onus off of those responsible. He said that existing laws could deal with some problems – such as parked vehicles blocking a narrow road. “One of my concerns is that we would want to not over-regulate,” he said.

In part, going forward “I think we need to define fee-based versus non-fee-based” ventures, Shea said. Also, “it may come down to a for-profit venture versus a non-for-profit … a distinction I think could be important.” He emphasized, “the intent is not to discourage fundraising in the town.”

Questions also arose about having a fire truck at events and imposing duties on fire company volunteers, and whether “we have enough fire departments” if several events occur on the same day.

Shea and Van Tassel said that arrangements with the fire departments are one item the board must address as it reworks the draft law.

The law’s effect on businesses also came up. Evelyn Watters, a producer of advertising commercials nationwide, said she instructs her location scouts to avoid find places with extra restrictions and favor those “which are film-friendly. I think we owe it to local business owners and property owners to be as film-friendly as possible.”

Councilor Montgomery, a veteran of the restaurant and hospitality business, similarly warned against anti-business attitudes. She recalled working at the restaurant that once stood near the waterfront at “our beloved Dockside” but closed – largely, she said, because of hostility from some residents. As well as serving food, the restaurant accommodated organizational uses and gave public exposure to local musicians.

“For years and years of booking music, there was nothing but complaints,” Montgomery recalled, drawing a parallel with what could happen town-wide. “Business owners just will not open a business here if that continues. We have to decide if that’s the kind of town we’re going to live in.”

Michael Liguori, a former attorney for the Village of Cold Spring, spoke on behalf of clients, neighbors of Boscobel, who dislike loud music at outdoor weddings. He supported the effort to draft an effective law, including provisions on sound volumes. “You want to have a decibel level and a mechanism for enforcement,” he advised.

The hearing ended with Shea thanking attendees “for the great commentary. That’s what good government is all about.” Earlier in the evening, he similarly welcomed the debate and said that typically with residents’ input, “we get a better law.”