Put yourself in Stevan McAleer’s shoes, just for a minute. You’re the passenger in a car. There’s a 16-year-old girl behind the wheel. She doesn’t have her driver’s license yet — and she’s going 140 miles an hour. How do you feel? Guaranteed, unlike McAleer, you’re not urging her to squeeze out a few more miles per hour. 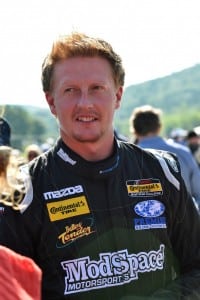 McAleer, a resident of Cold Spring, is a professional racing driver and instructor. He competes in the Continental Tire Series, driving a Mazda MX-5, sponsored by Mazda and ModSpace Motorsports. The competition includes Porsches, Audis and BMWs. He and teammate Chad McCumbree lead the 2015 series standings by three points with just four races to go — thanks most recently to a dominant win at Lime Rock Park in Connecticut on July 25.

McAleer has a fond memory of another first-place finish earlier this year at Watkins Glen, New York, in the pouring rain. “I loved it,” he said with a laugh. “I’m Scottish!”

McAleer came to the U.S. from his home in Glasgow in 2005. Like many drivers he got his start in karting. “I did a lot of karting … and was very successful,” he said. “I won the Scottish Karting Championship four times.” He came to America to further his racing career, on a scholarship from the renowned Skip Barber Racing School.

He earned that prize, including a free year of racing, by winning the Renault U.K. Clio Cup championship. “I didn’t know a thing about Skip Barber Racing, but it was the best career move I’ve made.”

Confidence no longer an issue

The 30-year-old Scot easily puts his finger on what draws him to racing. “I like winning,” he said. “And … my dad drove cars, not for money, but in sprints and hill climbs.” McAleer said his driving has gotten stronger each year after what was a challenging start. “I came here with nothing, no job,” he said, “but the last few years have been such a confidence booster.”

Confidence is no longer an issue, aided in part by McAleer’s winning the 2012 Playboy Mazda MX-5 Cup championship. Asked about his current racing goals, he responded quickly: “I want to win at Le Mans and Daytona.” Both are 24-hour endurance races and among the most prestigious racing events in the world. “I’m selfish — I want to win them both,” he added. 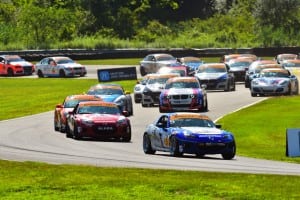 McAleer also owns and operates a karting business, with help from his brother Stuart, who came from Scotland last year. “We have 10 karts and about 18 drivers. I provide the coaching,” McAleer said. McAleer Motorsports is based in Cold Spring, with most of the karting done at Oakland Valley Race Park, near Monticello, New York. His carts are not of the amusement park variety. “They go 70 to 80 miles an hour,” he said.

His kart-racing days well behind him, McAleer said that his ultimate driving experience now would be to put a Mazda Prototype LMP2 through its paces — a limited production car that zips along at 200 mph.

A few years ago, McAleer happened to meet Ari Straus, another Cold Spring resident, while working at the karting track in Mount Kisco. Straus is president, CEO and partner at the Monticello Motor Club (MMC), which, along with country club amenities, features a 4.1-mile road course, professional driving instruction, car storage and racing car rentals. 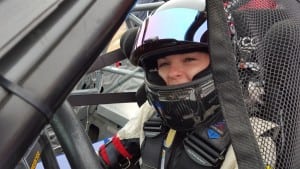 It was a fortuitous crossing of paths for McAleer. He is now in his third year as one of five professional driving instructors at the club. It was at MMC that he was paired with one of his current racing students, Aurora Straus — Ari’s daughter — the 16-year-old McAleer was encouraging earlier in the story.

Aurora began her apprenticeship with McAleer two years ago on the track at MMC. “I remember clearly the first time I went over 100 miles an hour,” she recalled. “I never thought I’d have the guts to go that fast, but once I hit 103, I wanted to go 200. I was hooked.”

She knows the source of her need for speed. “There’s the folksy ‘let’s all be friends’ side of me … but there’s also the adrenaline-junkie side of me. I was always the kid who wanted to go on the roller coasters that no one else would.” But it’s not just about the adrenaline. “I also love the mechanics behind [racing],” Straus said. “I’m a math and physics person. After doing a lap I love to look at the data, and Steve’s great at helping with that.”

Youngest in her class

Straus races in a professional circuit, the Battery Tender Mazda MX-5 Cup. The Mazda MX-5 she drives “is almost the same as Steve’s; it’s just a less modified car.” She is not hard to pick out among her fellow racers. “I’m one of two or three 16-year-olds — and I’m the youngest,” she said. According to Straus, there are two main types of drivers in her series, “guys in their 20s who are trying to make it and ‘gentleman drivers’ in their 40s.” As for the competition they provide, “It’s some of the best wheel-to-wheel racing in the country.” 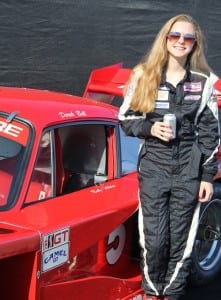 She originally got onto the track because her father wanted her to learn defensive driving skills. What does Dad think of her racing career? “He loves it. It brings us together … It’s a huge bonding experience,” she said. “We travel across the country together; sometimes we even race on the same team.” She recalled finishing second at Sebring, Florida, with her dad, an endurance race in which Aurora spent more than four hours behind the wheel of a Porsche Cayman.

Aurora and McAleer seem to suit each other as student and teacher. “I’ve seen other instructors who teach from the book,” Aurora said. “The way Steve teaches changes with every student. He completely changes his dynamic. He’s not just a natural-born driver; he’s a natural-born teacher.”

In contrast to having driven at speeds of up to 150 miles an hour, Aurora is also well known as a singer-songwriter. She feels there’s a parallel with racing. “The adrenaline is more similar than I thought,” she said. “When you perform a song that you wrote, you feel naked in front of the audience. Racing is a different kind of adrenaline, but it’s the same nervousness, the same butterflies in your stomach.”

On the track, McAleer says that Aurora’s biggest asset is her ability to listen and learn. “She’s very new to the sport; this is her first serious year. She’s still learning and we’re making big gains,” he said. “Aurora enjoys being pushed. She’s very competitive — she gets that from Ari.” McAleer describes the series that Aurora races in as “unbelievably competitive.”

Straus said that she’d like to rise to the level of racing that McAleer now competes in. “But it’s not going to be my career. Not everyone’s a natural like Steve. I want to continue with school.” And what about that driver’s license? “I got it two weeks ago and it was a big milestone,” she said. “Now I can drive myself to the track.” Big milestone indeed, especially for a young woman who races in a Mazda MX-5.

One thought on “Feeding the Need for Speed”