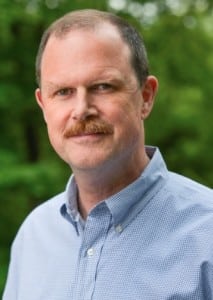 Lithgow Osborne, the Democratic candidate for Putnam County legislator representing District 1, spoke with The Paper. His answers were edited slightly for conciseness.

Why do you want to be county legislator?

Frankly, I think I can do a better job. I feel I would be a much stronger advocate for Philipstown and for the portion of Putnam Valley that is part of the district. The incumbent [Barbara Scuccimarra] said she would work to bring some of the overpayment in tax money back  – either lower taxes or bring money back to Philipstown. And that hasn’t been the case, because she’s not really worked to lower taxes and she’s more or less rubberstamped everything she’s been asked to rubberstamp by the county executive [MaryEllen Odell]. I don’t feel she’s the best advocate at the county. I feel like we’re paying a lot of money to the county and we’re not really seeing that money come back. We’re not seeing services.

I think having a legislator not afraid to push back a little harder would be good for Philipstown but also good for the county. As a lawmaker, a legislator, a public servant, you have to strike out on your own. You have to take a stand. You have to stick up for something you believe in. You can’t just go along to get along.

What are your qualifications for the job?

I’ve been a small-business owner. Right now I’m an executive and building and helping create an online luxury goods website. If anything, it’s taught me how to work with other people. One of the key things you need to be able to do is listen and to understand what that person is saying. If you don’t listen to what is being said or you don’t fully read the documents placed before you, you run the risk of making mistakes. And I know that has happened at the county level.

What would your priorities be?

Philipstown sends overages to Putnam County. They expect to get X amount from Philipstown; they get X amount-plus. Sometimes she [Odell] uses it to pay for the shortfalls [in taxes] of the other towns. I think that’s wrong. Instead of taking our money and giving it to another community, I think we should get that money back.

My priorities would be to work as hard as possible to rein in this budget and stop spending on projects that are unnecessary. I’d look into the hiring practices. It seems to me we have a lot of employees in the county. I think we don’t need to have nearly as many. It’s really about serving the people. That money comes from the taxpayers. So if we [as a county] are over budget, if we are misspending money, if we are flabby, in excess, if we have too many employees, then we need to do something about that. I understand there’s a $2 million deficit right now. If it is true, that’s a problem.

Another priority: I’d like to start a serious effort to look for businesses and encouraging entrepreneurs – artists, artisans – and try to bring some more of that energy to Philipstown. Up and down Route 9 there are still buildings for sale. We could seek to find businesses to repurpose those. A greater effort needs to be made to look for individuals who might want to set up their businesses here and hire local people. Wouldn’t that be amazing – if we had more people who live in Philipstown able to work here as well? I now work at home. I’m very lucky. I’d like more people to experience that.

I’d also like to see the county get out of court and have the county’s lawyers not spend so much time wasting taxpayer money in court: The county went to court to overturn the decision by the judge in which it was told the county clerk had to release the names of the people who had handguns. [Withholding] it is against the law; that information should be public. The county executive and county clerk are not paid to be advocating privacy or Second Amendment rights.

What steps would you take to get a portion of sales tax returned?

You can bury the bad stuff right deep in the heart of any budget. The first thing I’d try and do is ascertain where we’re overspending, in conjunction with my fellow legislators. I don’t believe they’re all so happy with the budget, either. They care very deeply about how this all plays out. I look forward to working with some of them to bring about some fiscal responsibility, because I don’t think we have it.

What should be the primary role of county legislator? To bring services and act as a liaison between constituents and county government? Or to help set policy and govern?

Absolutely. I’m a quick learner. I understand that you just don’t go in and clean up the mess. It’s a lot of teamwork. There are lots of connections and bridges and alliances to be made. You have to work with other legislators. It’s certainly going to be a lot of hard work, I’ve no doubt about that. But I’m perfectly confident I’ll figure it out.

Why is it important to have county services in Philipstown?

I think it’s important because there are so many people in a situation where going to the county is difficult. It requires taking a morning off. Maybe we need to start looking at this [planned Butterfield] senior center more as a community center. The DMV [Department of Motor Vehicles] does very well, it brings in a lot of money. Maybe they could apportion a small bit of that and work at having an office once or twice a month over here. Or if you could do that online … that’s exactly how government saves money. The internet is one big fat way to save money and provide transparency. Then that money would stay in Putnam County. Do I think that is going to be an avalanche of dollars? No, but I think it would be an opportunity for some efficiency and for thinking of new ways to serve the public.

We deserve much better representation at the county level and I think I can do a better job.