Citing everything from traffic hazards and threats to their serenity to toxic contamination and the detrimental effects of liquor stores on communities, opponents of a planned expansion of the Garrison Café into a restaurant returned to the Philipstown Planning Board Thursday night (Sept. 17) to continue making their case.

Somewhat smaller in number, other Garrison residents supported the restaurant proposal of Lydia and Matt McMahon. Owners of the cafe business but not the underlying property, the McMahons want to open a wine bar-type restaurant several nights a week, perhaps selling wine on the side, and Matt McMahon described the expansion as vital to the enterprise’s success.

The debate occurred during the second part of a public hearing whose first round took place in July. The Planning Board met at the Butterfield Library, in Cold Spring, drawing a near-capacity audience. Along with their verbal comments, the neighbors presented a 14-page position paper, signed by 18 individuals, delineating their opposition, with photographs, charts, excerpts of traffic and environmental studies, and other data. 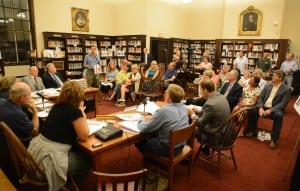 Philipstown Planning Board members and their advisors, at the table, listen to public comments on the proposed expansion of the Garrison Cafe.

After the audience input, the Planning Board closed the hearing, without other action on the proposal, which it must consider in depth before reaching any conclusions. Further work awaits the applicants, too.

Located in Garrison on land on Route 9D at Grassi and Alfalfa Lanes, the café is near St. Philip’s Episcopal Church, the U.S. Post Office, the Garrison Union Free School, a regulated wetland, and a dozen homes. The overall site consists of two adjacent parcels, one in the highway/mixed-use district and the other in the hamlet/residential district, and the café building contains a vacant, three-bedroom apartment. The restaurant would use the apartment space.

A venue for get-togethers

Some Garrison residents portrayed the planned restaurant as a welcome local addition, somewhere to gather and dine close to home.

“We’re looking forward to having a place where friends can meet, neighbors can meet,” said Jamie Copeland, a Garrison resident and architect. “It’s a community opportunity for people to get together.”

Avery Road resident Anita Angelopoulos informed the Planning Board that “we think this is a very important small business for the Garrison community. We want to spend our money in Garrison.”

Fears of pollution and bars

The property once housed a gasoline station and the New York State Department of Environmental Conservation opened an investigation after reports in 2002 of spillage of hazardous materials into the ground. 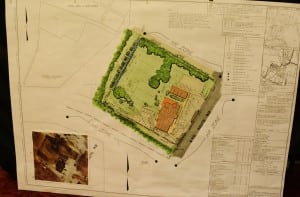 The plans, as of Sept. 17, for the proposed expansion of the Garrison Cafe, were available at the Planning Board public hearing.

Questions about protection of the wetlands remain and “for that reason alone” the Planning Board should be wary, according to David Gordon, an environmental lawyer based in Ulster County, representing the anti-restaurant contingent. “This is an existing toxic-spill site. It was never cleaned up. The file is still open. There’s still gasoline products in the ground and, historically, this has contaminated wells in the neighborhood.”

He also raised concerns about lighting, noise, and traffic, if the café expands. “You need sidewalks; you need crosswalks” before further commercial activity ensues along that stretch of 9D, Gordon said.

The opponents’ position paper discusses such matters in detail and likewise questions the wisdom of introducing an alcoholic beverage store. “Little attention has been given to the proposed liquor store,” the paper states. “Studies have established a link between alcohol availability at the retail level and violent crimes.”

Goldee Greene, who lives on Alfalfa Lane, described the detrimental effects of bars as well. “It really sucks to live behind a bar. It’s a nightmare,” she said. “It’s just not right in the hamlet of Garrison to come into someone’s neighborhood and make it a hang-out. “It is an inappropriate project for this location. It’s a terrible idea and it’s not anything that’s going to help our community.”

McMahon emphasized that without the evening trade, the café cannot succeed. It “is not a self-sustainable business” if limited to breakfast and lunch, he said. “You do OK in the summer and the winter kills you. This [restaurant] is our plan to keep the café in business. We are in the commercial area in Garrison. We feel that it’s our right to do so.” He noted the building’s recent history and said that if the expansion “is not going to work, we’ll just be the fifth owners that get out of this deal as quick as we possibly can.”

The restaurant would not be large and “we’re thinking of it as a tiny little pub” like those found in England and Ireland, McMahon said. He also expressed second thoughts about selling wine or other alcohol from a store there. “I wish the wine shop wasn’t even in the plans,” he said. However, he went on, “I reject it being cast as anything like a package store, a liquor store.”

Furthermore, he said, the shop would involve a lengthy New York State approval process and “for us it’s a future ‘maybe,’ ‘what if,’ question.”