On Friday, Oct. 2, at 8 p.m., singer-songwriter Andy Revkin returns to the Depot Theatre for his first solo show in more than a decade. Songs will range from folk classics he learned from his parents sailing New England waters to British ballads lamenting the loss of Arctic explorers to environmental anthems like Bruce Cockburn’s “If a Tree Falls” and Revkin’s own “Liberated Carbon.” 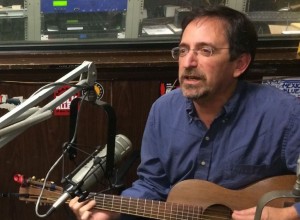 He will also perform selections from his album A Very Fine Line, which one critic described as a “tasty mix of roots goulash.” They include “Breakneck Ridge” and “Between the River and the Rails,” about the bygone Guinan’s Irish pub and general store, which was located near the theater.

Revkin is a longtime environmental journalist and blogger for The New York Times. Tickets are $15. Phone 845-424-3900 or visit brownpapertickets.com.