Racing for a weekend pasta fix

Cross-country running events seem to have cropped up all over my schedule (my sophomore son runs for James O’Neill High School) and weekends are booked through November. There’s been little running on my part, but I’ve certainly accumulated a couple of miles of moderate cardio while trekking about hilly landscapes to watch young runners weave back and forth.

What’s rewarding about watching high school students take on a running challenge is seeing everyone cross the finish line, from the first-timers to the middle-of-the-pack to the athletes setting records. Cross-country runners aren’t known as the rowdy type, but they’ve got spirit.

At the Washingtonville Invitational in Orange County on a humid Saturday morning this month, a deep field included runners from O’Neill, Haldane and Beacon. An inspiring race by Brewster’s Kevin Hazelwood made even the spectators a little hungry with all the calories he likely burned. (He finished the three-mile course in 15:20:99, more than a minute ahead of the pack.) 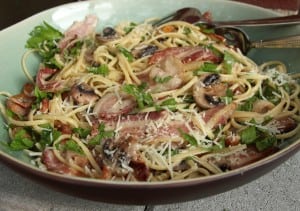 A pasta dish with bacon and mushrooms (photo by M.A. Ebner)

It made me wonder what parents are feeding these kids, which led to a lesson in “be careful what you wish for.” Wondering this aloud resulted in hosting in our  backyard the next O’Neill cross-country team dinner. Families contribute pasta, sauce, salads and bread for race weekend supper. The meal offered the night before a Sept. 12 race in Warwick included a variety of pastas and sauces — as well as a gluten-free corn and rice elbow pasta blend.

The O’Neill coach encourages a light breakfast on race mornings but said his runners could eat as much pasta and salad as they liked the night before the race. They were likely to burn it off running around the yard before they even left the gathering–an advantage of being a teenager.

Most filled their plates at least twice. Two dishes in particular — a baked penne studded with pork sausage and  plain pasta with a light olive oil — went quickly. An enormous salad prepared with leafy greens, sliced cucumbers and seeds and berries disappeared along with the tray of fruit. But that classic American dish, mac and cheese, took honors.

Two pans made with four cheeses fueled dozens of runners. The family who contributed the mac and cheese said there was no secret to it other than choosing favorite cheeses and folding them thoroughly into the pasta before baking. 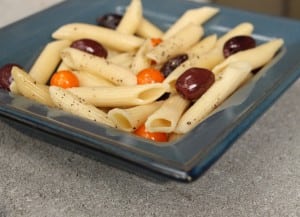 The non-runners in our family don’t regularly load up on pasta, but do on occasion eat  baked ziti with red sauce or linguine with bacon. Penne tossed with olives also makes a meal, and anyone old enough with privileges to operate the kitchen stove can easily prepare it.

The purpose of the team pasta suppers may indeed be linked to eating a hearty meal the night before a race, but they are more important as a chance to connect. It wouldn’t have mattered if the menu had included whole-grain tortellini or simple spaghetti. The best choice on the menu was the chance to bond. And, like it or not, for most of us eating pasta this fall should come with additional instructions: Enjoy the carbs, but follow up with a long walk, rigorous ride or a leaf-peeping hike.

Slice garlic cloves and return to skillet with sliced mushrooms and white wine. Cook 3 to 5 minutes over medium heat.