For 30 years, Leonora Burton has operated The Country Goose on Main Street in Cold Spring with nary an incident — until last Saturday (Sept. 19), when someone purloined a small part of the Goose’s nest egg.

Burton’s handbag, a canvas satchel, containing store income, her wallet, credit cards, driver’s license and other essentials, disappeared from beneath the counter of her kitchen- and tea-supply shop in a moment when she had turned her attention elsewhere. 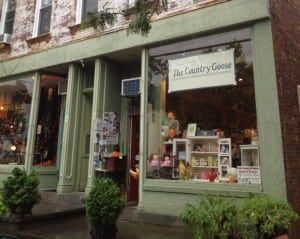 The Country Goose was not alone in misfortune. Thieves also hit Solomon’s Mine Antiques the same weekend and Le Bouchon restaurant overnight on Sept. 16.

Michael V. Ierra, manager of Le Bouchon, said the culprits there broke in through the back door, smashing the frame, and stole about $500 worth of cash and liquor. “It was very haphazard,” he said. Because the thief or thieves left behind some of the higher-priced liquors, Ierra said he assumes they were either “very stupid or very young.”

The restaurant staff, after discovering the break-in, called the Cold Spring Police Department and filed a report. Investigators from the Putnam County Sheriff’s Department tested for fingerprints. “They were very nice and very efficient,” Ierra said. A week after the theft, he had received no updates on the case.

Jerry Solomon, of Solomon’s Mines, said Thursday that someone swiped a $65 vase from his shop sometime last weekend — he was unsure exactly when.

In the aftermath of the loss at the Goose, Burton alerted others and tried to make up for the contents of her wallet.

“Just a heads-up to everyone,” she wrote other Main Street proprietors on Sept. 20 in an e-mail. “My bag, hidden under the counter — with my entire life in it, including cash — was stolen yesterday sometime during the afternoon. Please make certain that you keep everything safe.”

By Wednesday afternoon, Burton, a native of Wales, had contacted her banks in Cold Spring and Great Britain, as well as credit card companies, and was making progress in sorting out the repercussions. Not everything could be readily replaced: Along with the valuables in her satchel, Burton, an author of historical romance novels, had notes on a pending manuscript.

“I have no identity,” she said Wednesday evening. She added that “it’s amazing how difficult everything is” dealing with the bureaucracies of U.S. institutions, compared to those she had interacted with in the U.K.