Two items on the Philipstown Town Board’s agenda Oct. 1 highlighted the apparent difficulty of getting various government agencies to work together, notwithstanding serious needs or state pressure to share services.

One issue involved fighting drug abuse; the other, fixing a road long plagued by floods. Both left Town Board members expressing frustration during their monthly meeting at Town Hall.

With two police stations, three municipal buildings, various other public facilities and grassroots fervor for fighting a backyard drug epidemic, it might seem easy to find a place for a lock box into which residents can drop expired prescription drugs.

Lisa Scicluna, a member of the Philipstown branch of the Communities That Care Coalition, described the difficulties the group has faced trying to install a take-back box. “I’m asking if we can somehow get together all the powers that need to be” and move forward, she told the board. Scicluna said that in seeking a lock-box location, the coalition had approached various potential allies, including Drug World pharmacy in Cold Spring, the Cold Spring Police Department and the Putnam County Sheriff’s Department, which staffs a substation in Nelsonville, without resolving anything. 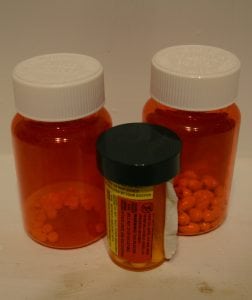 Unused prescription drugs could be dropped into a lock box if a take-back program got underway in Philipstown. (Photo by L.S. Armstrong)

“It’s my understanding we’re really not able to come to a solid plan,” she said. “I think the biggest challenge has been to try to get everyone on the same page.”

Councilor Nancy Montgomery cited a federal requirement for surveillance of drug disposal boxes as an obstacle, along with pharmacies’ reluctance to help. “Why can’t you return your medications to the drugstore? Why do we need law enforcement to watch this box?” she asked. Ideally, she said, the box would be located at the police department office at Village Hall, where officers could monitor it.

Scicluna pointed out that Beacon, Peekskill, Carmel and Kent have drug-disposal programs and “we need to get that here.” She said that many people who develop opiate addictions start with prescription pills found in the home. “There’s the environmental issue as well,” she said, given the pollution that can occur when prescription drugs dumped down sinks or toilets reach groundwater.

Another option would be a take-back site open for a two-hour period each month at a cost of about $64, Scicluna noted. She said the coalition had been trying to determine who might foot the bill. In response, Supervisor Richard Shea promised that Philipstown would cover the expense. “If it comes down to who’s going to fund this small amount” and Cold Spring and its police can provide a take-back site, “let’s just do it,” he urged.

As a Town Board, he said, “we have no issue with coming up with triple that, quadruple that.” He also proposed that the town government, Village of Cold Spring and its police, Putnam County Sheriff’s Department, and the coalition iron out the logistics soon. Without that push, he warned, “this stuff becomes amorphous and it doesn’t get done.”

For at least eight years Philipstown, Putnam County, the Army Corps of Engineers and Metro-North have discussed fixing Manitou Station Road, which runs from Route 9D in southern Philipstown toward the Hudson River along a marsh and suffers severe washouts.

After drafting a plan, the town is now prepared to act alone. “We were looking for willing partners,” Shea said. “We didn’t find them.” He complained that county-owned wetlands complicate the problem but that county officials do little but offer to continue the dialogue. “At this point, that’s nonsense,” Shea said. 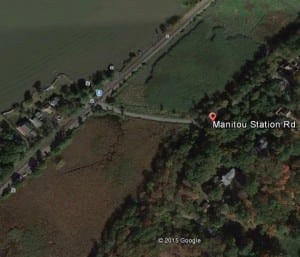 The town’s consulting engineer, Ron Gainer, predicts the project would take two years. Shea said the town would proceed in stages but that “we do have to move this along. Residents down there have suffered from this for too long” while “safety is being compromised,” he said.

Shea priced the project at $900,000 to $1.2 million. “For us, that’s a lot of money,” he said. “We’re willing to put up our portion of the money” but cannot afford the entire cost. Metro-North has offered undefined aid (the road crosses its tracks near the river), but “the county pretty much made it clear they’re not going to contribute,” Shea said.

At the meeting, the board approved engineering plans for fixing the road, which, Shea said, “needs to be lifted up about six feet.”

In July 2013, County Executive MaryEllen Odell agreed that Manitou Station Road needed repair but said the county lacked the financial resources. Last year the county tried to divert to Manitou Station Road and other projects about $1.2 million in state and federal funds earmarked to rebuild a bridge to reach a single home on Mill Road. However, the legislators were told the funds could not be used for anything but the bridge.