While Beacon, Cold Spring and Nelsonville residents have been alerted about the low levels at municipal reservoirs and told to conserve, Philipstown residents with wells have no way to gauge their water supply.

The U.S. Geologic Survey monitors wells around the country, including one at Bear Mountain State Park (since 2002), one near Mahopac (since 2004) and a third near the eastern border of the county at Putnam Lake (since 2006), to keep an eye on the groundwater levels, which are reported in great detail at Groundwater Watch. The water at the Bear Mountain and Mahopac wells is currently below normal levels, and on Sept. 1, the Putnam Lake well reached its lowest level since the USGS began monitoring the site. 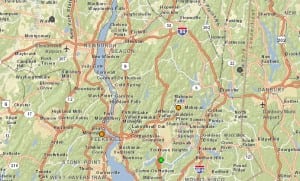 A map by the U.S. Geological Survey shows the locations of its area groundwater level testing points. Green indicates normal levels, orange indicates below normal and black is for high levels.

The problems began as early as January, when the area had a deep frost, explained Henry Boyd, a master driller for the Empire State Well Drillers Association and founder of Boyd Artesian Well in Carmel. It was compounded by heavy snowfall in February. “Snow is the best recharge for ground water but the ground was so frozen that when it melted this year, it ran off instead of soaking in,” he said.

The weather was wet in March, then dry through May, when the area went more than six weeks without rainfall. June was rainy, but Boyd said that once the vegetation is in full bloom, the plants soak it up and less reaches the water table.

During July, August, September and October, the area had little precipitation and the few storms dumped so much rain so fast that it ran off instead of soaking in. Slow and steady is the best type of rainfall for replenishing ground water. 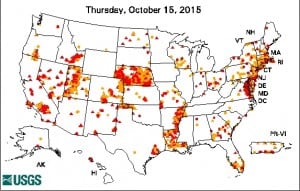 A map showing wells among the 1,400 monitored nationwide by the USGS in which water levels are below normal. Red circles indicate the most extreme conditions.

There are a several warning signs that your well may be in trouble, although Boyd says a well never goes completely dry; the level of water just gets too low to be brought to the surface. Watch your taps for slowing flow or air, both of which could be signs of low water levels. A major source of wasted water are toilets that are constantly running, which Boyd says he sees often.

Newer homes are less likely to have well problems because they are typically drilled deeper, both because improved technology makes it easier to do and health departments often require it. Wells that reach 200 to 500 feet below ground level are typical.

Wells are not regulated in the same way as the reservoirs, and so Dave Klotzle, Philipstown’s natural resources officer/wetlands inspector and Conservation Board member, said its role is mostly to make homeowners aware of the potential problem.

The Conservation Board, which is appointed by the Town Board, does oversee residential water usage for buildings and surfaces, however. For example, Klotzle said, “We discourage construction with impervious surfaces” because rainfall ends up in a storm drain instead of soaking into the ground. “Driveways can be gravel or pervious cement,” he said.

Roof water is also valuable and Klotzle said that the board wants to see that water going into a dry well or rain garden, which is a slightly depressed area that collects run-off. They aren’t used to capture rainfall, however: Use a rain barrel for that. It attaches to gutter downspouts to collect roof runoff and save water for another day. 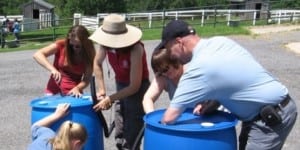 The Cornell Cooperative Extension of Putnam County is offering a rain barrel workshop on Saturday, Oct. 17 in Patterson (photo provided)

Although Philipstown doesn’t provide rain barrels, Klotzle said that some communities do and he plans to find out more for residents who have an interest. In the meantime, you can make your own. The Cornell Cooperative Extension of Putnam County is offering a one-hour workshop on Saturday, Oct. 17, in Patterson in which participants will construct a 55-gallon plastic rain barrel with spigot, mosquito screen and overflow. The cost is $45. The program, which begins at 11 a.m., will be held at the Patterson Environmental Park on South Street. Call 845-278-6738 or email [email protected] for information.