As Halloween approaches, a certain wistfulness crosses the face of Melissa Santos. She and her family have always been one of the big Parrott Street draws on Halloween, with its “only for the daring” displays. But on May 18 the driveway held a different horror — it was covered with debris from a fire that destroyed the second floor and attic.

Five months later, their charred home, its upper windows boarded, still stands, providing some comfort to Santos, who sometimes sits in her backyard, where she can hear a nearby creek, grabbing a moment away from her hectic household: While they wait for the home to be torn down and rebuilt, she and her husband Darrin and three children, Darrin, Daniel and Mikayla, share a one-bedroom loft cottage a stone’s throw away.

“Staying organized is challenging, especially because there are days when I’m on the phone the entire day relating to the fire,” Santos says. While the family is grateful to their neighbors, Maria and Rob Leiter, who immediately moved them into the cottage next door to their own house, looking at her damaged home every day has taken a toll on Santos, especially because she says there is not yet a fixed timetable for demolition and reconstruction. 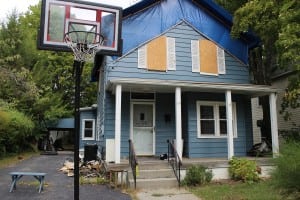 Street, which burned in May. (Photo by A. Rooney)

An environmental assessment was performed last week; if no asbestos is found, demolition can begin soon. Bill Bujarski, the Cold Spring building inspector, has pledged his assistance, telling Melissa, “as soon as you get your plans, send them to me — I want to get you into your home.”

Once everything is green-lighted, according to architect Jamie Copeland of Hudson Design, who volunteered his services, and pending confirmation of an initial determination that the foundation is solid, their new modular home can be built rapidly. Most of the building for modular homes is done off-site, and so even with winter weather, the on-site construction can take as little as a week.

“There wasn’t an area [of the house] that wasn’t damaged by smoke and water and infused with the smell of smoke,” says Copeland, who is a volunteer with the Garrison Volunteer Fire Company. “I’ve been a firefighter for 14 years and I can never get used to seeing a house burn. It’s very different than a commercial establishment, so personal and traumatic, and routines are upset, memories lost. Getting the family back in is important to do, and luckily we found a cross-section of people committed to just that idea.” 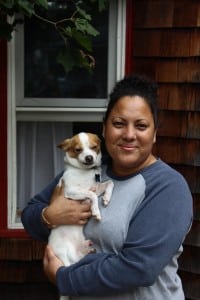 Santos urges everyone to examine their homeowner’s insurance policies carefully; she now understands much more about depreciation. The insurance adjuster goes “through every single thing,” values it, then depreciates. “It’s been frustrating having been a paying on time customer for 25 years and then having to wait so long for them to send us a check,” she says.

Although everyone in the family, including their dog, Pancho, walked away from the fire unscathed, the family has been visited by other traumas, with Melissa having battled cancer for a number of years. (She describes her current situation as “not in remission, but under control.”) In addition, Darrin’s mother, Helen, was killed and his father, Miguel (Michael), badly injured in a 2014 collision in which the other driver was charged with vehicular manslaughter.

When asked what the family’s current needs were, Melissa Santos answered quickly, “Prayers.”   Santos says she will forever be grateful to her friend Kristen Van Tassel, a volunteer firefighter, for having the presence of mind to go into the house after the fire was brought under control and remove framed photos, photo albums and other irreplaceable items.

The family received many clothing donations and gift cards. A Go Fund Me page, set up at the time of the fire, is still operational at gofundme.com. Alternatively, checks, made out to Melissa and Darrin Santos may be mailed to the family at 26 Bank St., Cold Spring. Good used, winter clothing would be appreciated: long-sleeved shirts and sweatpants in adult size mediums. (no sweatshirts please — they have an abundance, and the family would prefer to go shopping for winter coats.) Items can be dropped off at 26 Bank St.

Jamie Copeland sees the upside to all that the family has been through. “They’ll get through this,” he said. “Their family is intact and they’ve all weathered this together. They’ll move in and new memories will be created. Good will come out of it.”

When the family finally moves into their new home, Melissa Santos says she would like to throw a community thank-you block party. “Everything that everyone did, whether it was fighting the fire, comforting my daughter when she was crying, the big donation we got from the lacrosse team,” she says. “There were so many things — I’m worried about forgetting some of them — a smile, a hug a ‘How’re you doing?’, the church, the prayers, the food donations, we appreciate everything and everybody, for what they’ve done.” (One of her neighbors, Maria Ricapito, wrote a story about the community effort to assist the Santos that appears in the November issue of Real Simple.)

As for Halloween, the family plans to be on Parrott Street as usual, handing out candy, although they’re not sure if they’ll stand in front of their burned house or join friends and neighbors, the Leiters. But they’re not about to miss it and promise that next Halloween they will be back at their old spot with a new house, ready to scare everyone again.