Dealing in one week with two issues that provoked spirited debate all autumn, the Putnam County Legislature adopted a $151.3 million 2016 county budget on Oct. 28 and Nov. 4 approved an annual lease of about $128,000 for a senior citizen center at the Butterfield complex — provided that a $500,000 donation for the center comes through.

Meeting Wednesday night, the legislature adopted a resolution allowing rental of 6,000 square feet in the existing Lahey Pavilion, but made the lease execution contingent upon guarantees from Elizabeth and Roger Ailes that the $500,000 they pledged for the facility – a gift with a Nov. 30 deadline — remains available. The pavilion currently houses medical offices at Butterfield, on Cold Spring’s southern edge.

The lease itself was not publicly released and the resolution did not specify the rent amount, but after the meeting Deputy County Executive Bruce Walker told The Paper the rate is $12.95 a square foot, plus a $50,000 fee for usage of common areas of the property for a total of $127,770. Walker said the 2016 rent charge, for partial-year occupancy once the building becomes usable, will be $94,275. 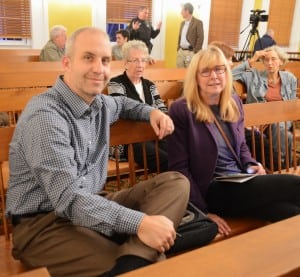 Wright explained that because he had not received requested information, he lacked sufficient knowledge for a decision. On Oct. 19, during a committee review, questions arose about locating the center in the Lahey Pavilion, instead of in new construction, and Wright had sought a cost comparison of the two options and details of the Ailes’ funding.

Albano said Wednesday that “it’s very clear and apparent this will cost less than the other location … I think it will be a substantial saving” and provide better access to the elderly.

Fresh from a re-election victory Tuesday but pale and feeling ill, Scuccimarra hoarsely expressed gratitude for her colleagues’ support.

Also thanking the legislature for moving the project ahead, Pat Sheehy, director of the Office for Senior Resources, said that “it’s just really great to see it happen.”

After the meeting, Walker said that the annual cost for the center at Butterfield “is about half of what we pay” at senior centers in Putnam Valley and Mahopac. He mentioned Philipstown’s high percentage of older residents and said the Lahey space represents “a great opportunity to give them a better place” than their current quarters in the American Legion.

Much of the budget controversy involved planned increases, ultimately adopted, to many county retirees’ contributions to health insurance.

“We can no longer expect the taxpayer to pay 95 percent of the cost” of healthcare, Nacerino said, noting that older residents who aren’t ex-county employees enjoy far less generous benefits.

“We proposed a plan that I think is fair,” added Castellano, who chairs the legislature’s Audit and Administration Committee. “You have to look at the numbers.”

But Wright asserted that the health-care overhaul introduces a “means test” on benefits and that the county might just as well use a means test for county fees or when providing law enforcement. Instead, “let’s talk about shared services … and ways to shrink government,” he said. “Let’s talk about a sale-tax return to various municipalities.”

Gross advised the legislature to exercise “due diligence” and find other savings. “The money is there if we want to have the guts to do what we have to do,” he said.

“This is the wrong thing to do,” LoBue said of the changes. “It’s the wrong process.” She called for all parties involved to collaborate on health-care revisions. She also criticized Odell for “outrageous spending” and declared that “we don’t have a revenue problem, we have a spending problem.”