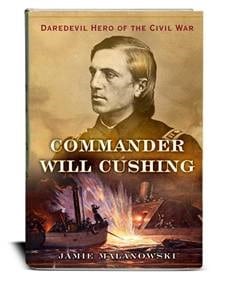 In October 1864, the confederate ironclad CSS Albemarle had sunk two federal warships and damaged seven others, taking control of the Roanoke River and threatening the entire Union blockade. But Navy Lt. William Barker Cushing, 21, hatched a daring plan: attack the warship with a few dozen troops in two small, wooden boats. The torpedoing of the Albemarle and Cushing’s two-day escape downriver became one of the most dramatic exploits in U.S. military history.

Tossed out of the Naval Academy for “buffoonery,” Cushing proved himself a prodigy. Given command of a small Union ship, he performed near-suicidal raids, “cutting out” Confederate ships and thwarting blockade runners. With higher commands and larger ships, Cushing’s exploits grew bolder.

Jamie Malanowski, author of Commander Will Cushing, Daredevil Hero of the Civil War, will speak about Cushing at 10 a.m. on Saturday, Nov. 14, at the Putnam Grange Hall in Putnam Valley as part of the Putnam Valley Historical Society’s American History lecture series.

Malanowski is also the author of And the War Came, a history of the six months that preceded the start of the Civil War. The Grange Hall is located at 128 Mill Street.