Two of three members who resigned are replaced

In a meeting that lasted less than five minutes, Cold Spring Mayor Dave Merandy replaced two of three members of the Cold Spring Planning Board who resigned last week. The special meeting of the Village Board on Tuesday (Nov. 17) began at 6 p.m. and ended at 6:03. During that brief span Dave Marion and Judith Kepner Rose were appointed. One spot remains unfilled.

Marion is owner and president of Full Spectrum Construction Services, a Cold Spring-based company. For several years up until 2013 he served as a senior construction engineer with the Metro-North Railroad.

Kepner Rose is a senior manager with NeighborhoodWorks, a nonprofit organization that supports affordable housing though a network of more than 200 community development organizations nationwide. She is also a ceramic artist.

On Nov. 10, Barney Molloy, James Pergamo and Karen Dunn resigned from the Planning Board, citing disagreement over the appointment of former village Trustee Matt Francisco as chair and concerns over how the Butterfield development project was being handled by the Merandy administration.

“I think it’s going to be a very strong board,” Merandy said of the appointments. “Work will continue without a pause.”

Trustees Michael Bowman and Cathryn Fadde did not attend Tuesday’s meeting. The appointments were approved by separate 3-0 votes by Merandy and Trustees Marie Early and Fran Murphy.

After Tuesday’s meeting, Early and Murphy walked Main Street with a number of village merchants to discuss lighting improvements along Cold Spring’s main business corridor. The federally funded $970,000 Main Street Project, which will get underway in late winter or early spring after some 10 years of planning, will include lighting upgrades as well as sidewalk and drainage improvements. The village will pay about $200,000 of the project cost.

On the tour, Murphy explained that the Main Street Project will replace existing, outdated light fixtures with LED technology, which produces better quality illumination while consuming less energy. Eleven poles along the street will remain unlit when the project is complete, although Murphy said the village is working with Central Hudson to provide more lighting if it proves necessary.

Next week, she said, two malfunctioning older lights will be replaced with LED fixtures, providing an opportunity to assess the impact of the new system. Murphy plans to present a report on Main Street lighting at next week’s Village Board meeting. “We are more on the same page than people realized,” she said after the tour.

At the Nov. 10 board meeting, during the public comment period, former Trustee Airinhos Serradas read an op-ed piece he wrote, published recently in the PCNR. In it, he observed that three imminent land-use changes will have a beneficial impact on the village tax base: the redevelopment of the Butterfield Hospital site, the proposed sale of five acres of Scenic Hudson-owned land known as the Campbell property as a residential lot, and the sale of the VFW Hall formerly owned by the Town of Philipstown.

Serradas estimated the Butterfield project will produce $100,000 in property tax revenue for Cold Spring while the Campbell property and former VFW Hall will produce $25,000 and $11,000 annually. He suggested this new revenue would reduce taxes paid by residents and fund initiatives such as sidewalk repair, burying electrical lines and the purchase of Big Belly trash bins.

In an interview with The Paper, Village of Cold Spring Accountant Ellen Mageean agreed with Serradas that the pending land-use changes will provide some relief for local taxpayers because they will increase the total assessed value of property within the village, which in turn will mean a lower tax rate. “The more ratables you have, the better it is for taxpayers,” she said.

But she pointed out that the new taxes will not mean any significant increase in funds available to the village for capital projects. Mageean explained that the total taxes levied in 2014-15, $1,543,011, will essentially stay the same for 2015-16 and for the foreseeable future and that spending cannot increase beyond what is permitted under the state-imposed tax cap.

Last year, she said the village was allowed a 1.72 percent increase in the total tax levy. “There may be a small bump in the tax levy next year,” because of the three land-use changes, she said. “But it won’t be a lot of money.”

Mageean plans to present a report on the anticipated effect of the new property taxes at the next monthly meeting of the Village Board.

Paving of the municipal parking lot on Fair Street was completed on Wednesday, Nov. 18. Parking spaces must be delineated before the lot is reopened and the village is deciding whether to install parking meters. 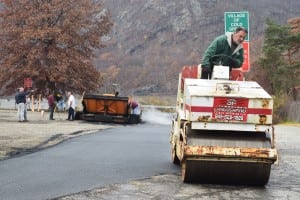 The public parking lot on Fair Street was repaved this week. (Photo by M. Turton)