Specials to be a hallmark of the re-opened historic inn

After 250 years, perhaps it was entitled to a bit of slumber time. Garrison’s historic Bird & Bottle Inn, built in 1761 and known then as Warren’s Tavern, was closed for five years, reopening just a few months ago under the slightly altered name of its new proprietor as Pamela’s Bird & Bottle Inn. 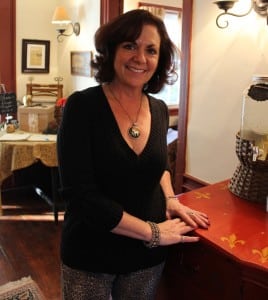 Pamela is Pamela Resch, whose other businesses, Pamela’s-on-Hudson, a special events and catering facility on the Newburgh waterfront, and Pamela’s Traveling Feast, an offsite planning and catering service, tie in with her new endeavor, rejuvenating the much-loved Old Albany Post Road property.

The Bird & Bottle has always been a focal point of hospitality in the region. It is situated favorably near the midpoint of the journey from New York City to Albany. Benjamin Franklin, according to notes published by the inn, “began placing mile markers on the Old Albany Post Road, increasing postal efficiency and allowing travelers to count the miles to Warren’s Tavern and a well-deserved rest.”

It was a popular watering hole for both British and American soldiers, but eventually the Continental Army seized the property, pressing it into services as a regional headquarters. With the advent of the steamboat, road traffic decreased and Warren’s Tavern closed down in 1832, becoming a farm and sawmill. It wasn’t until 1940 that the property reopened, as the Bird & Bottle.

Seventy-five years on, Resch is happy to carry on the inn-keeping tradition. “I always loved cooking,” she says. “By high school I was throwing lots of parties and doing all the cooking. I started waitressing at 15 and worked my way up: bussing, serving, bartending, hostessing, and doing the cooking. Traveling in Europe I got to know different cuisines. It’s always been an act of love for me: I get to make people happy for a living. It’s a passion. I love details and bringing a vision to life, creating memories. And I love the history of this place. This past weekend we had a couple stay here. Her mom and dad got married here in 1956. They were looking through their wedding pictures and decided to come up here for the weekend. This and other stories I’ve heard from people since taking over have given me a perspective on how this place has touched people’s lives.”

As for any ghostly activity, any creaking on the beautiful wooden floors, perhaps, Resch says: “I don’t call them ghosts. I prefer blessed souls or spirits. I think they’re really happy to have life put back into the place.” 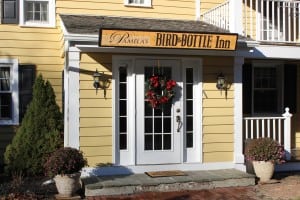 Still painted in its signature yellow, the Bird & Bottle Inn has added Pamela’s to its name. (Photo by A. Rooney)

Resch first visited the Bird & Bottle seven or eight years ago. She said she was immediately infatuated and cut out a photo of the inn to keep in a journal she keeps. With an extensive background in cooking, catering, event planning and teaching, Resch had a long-standing desire to run a boutique bed-and-breakfast establishment where she could also host special events.

The inn’s current owner (the property hasn’t changed hands yet) and former operator, Elaine Margolies, heard about Resch while seeking someone to purchase the inn who would love it as much as she did, according to Resch. Despite her affection for the property, Resch gave a lot of considered thought to the proposition. “I didn’t want to jump in and not have it be successful,” she says, adding “the unrolling has been very methodically planned.”

Now, after some small renovations (or, at least, continued maintenance — there is a caretaker on the premises — that comes with occupying a large, period home), the Bird & Bottle has opened its many doors and windows again. Its four bedrooms (three upstairs and one in an adjacent studio building) are available nightly except for Mondays, with a hot breakfast included. The bedrooms, decorated with colonial furnishings and each with a fireplace, include none of today’s electronic paraphernalia. Quite intentionally, there is no telephone or internet service in the rooms, with no televisions either. 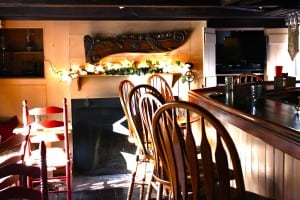 The Tap Room at Pamela’s Bird and Bottle Inn (Photo by A. Rooney)

The inn is also available for weddings and small wedding parties, with full catering provided. The spacious grounds include a brick patio, waterfall, gazebo, portico and the requisite babbling brook nearby. There is ample space for one or two large tents.

Pamela’s Bird & Bottle has already hosted some special events since reopening, including a wine pairing tasting. In the works for later this winter are hands-on cooking classes, making good use of the ample, spacious kitchen facilities; a speakeasy night and another featuring a 1920s flavor; and a murder mystery night, along with concerts and, in the spring, art shows outdoors. Resch hopes the local community will partake.

Although the 40-seat dining room and the very atmospheric tap room, its long bar and low ceilings conjuring up the many travelers who passed through, centuries ago, are only used for special occasion dinners, Resch hopes that nearby neighbors will come to the special evenings. When they do, they may often bring their stories of the place with them. Resch and her staff, many of whom now rotate between her three businesses, have also amassed information on local restaurants, sights and recreational facilities, trying to keep people in the area.

Resch says she may host an open house for the community on Sunday, Dec. 20. Check thebirdandbottleinn.com for updates.

One thought on “Bird & Bottle Inn Once Again Comes to Life”