It might seem intuitive: you observe someone’s change of behavior and it seems excessive. You look around for help, hoping you can prevent the person from bringing harm to him or herself or others.

Of course, these situations are complex and unpredictable, far more so when they involve children and teenagers still grappling with their own codes of behavior and maneuverings with peers. Social media also can distort perceptions for those most susceptible to being brought down by depression. 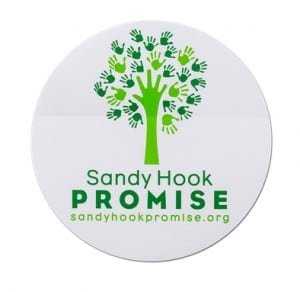 It is against this backdrop that Sandy Hook Promise was formed. Launched by residents of Newtown, Connecticut, including 16 families whose children and spouses were killed at Sandy Hook Elementary on Dec. 14, 2012, this national non-profit works to “prevent gun-related deaths due to crime, suicide and accidental discharge so that no other parent experiences the senseless, horrific loss of their child.” It does this by developing and implementing mental health and wellness programs that identify, intervene and help at-risk individuals as well as by addressing gun-safety practices.

One of its programs is called Say Something, echoing the familiar admonition, “See something, say something.” Putnam County Sheriff’s Department Deputy Paul Piazza, the School Resource Officer at Haldane, brought the program to students in the middle and high schools, and parents were introduced to it at an evening session on Dec. 8 sponsored by the PTA.

Donna Moxham of Sandy Hook Promise explained that Say Something teaches students how to look for warning signs, signals and threats, especially in social media, from individuals who may want to hurt themselves or others, then say something to a trusted adult to get them help. According to the PTA, the program is based on “research conducted by Dr. Dewey Cornell and Dr. Reid Meloy, two leading national experts in threat assessment and intervention.”

Moxham, a mother of four and former teacher who lives in Newtown, reminded the audience that most people who carry out acts of violence — harming others or themselves — mention their intentions beforehand, either verbally or through posts or tweets. She noted that many people are reluctant to “say something,” checking off common responses such as “I thought he just wanted attention” or “I saw his plans but didn’t believe he would ever do this.” Those that might prevent people from taking action include “He’s too young, he’ll never go through with it,” “I thought someone else would tell someone” and “I’m just waiting for the right moment to say something.” 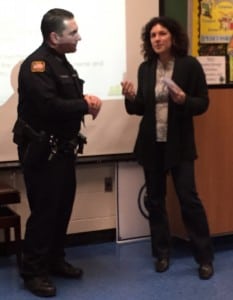 The SHP program has three points it shares with students, Moxham said: (1) Look for warning signs, signals and threats, (2) Act immediately — take it seriously, and (3) Say something to a trusted adult. Noting that schools are usually the safest places in the community, she nevertheless shared statistical research that shows a large number of victims of violence are hurt at school and also that a large number of students report being sad or hopeless for more than two weeks in the last 12 months.

She noted that thoughts, feelings and behaviors that raise concerns can be overt or vague, and include things like espousing increasingly rigid ideologies, giving away possessions and social media posts in the vein of “life isn’t worth living” or “someone should blow this place up” that otherwise might be dismissed as teenage angst. Deputy Piazza added that often these communications are not shared in public, but in private online gaming conversations.

Moxham said fears expressed by some teenagers of being labeled a traitor, of being ostracized or even physically hurt if they report suspicious behavior are valid but emphasized it was important to communicate the difference to children and teens of wanting to get someone in trouble versus wanting to help him or her.

As part of the program, students are given a card on which to list three adults they can turn to, with their contact information. They are encouraged to then enter this on their electronic device contacts, as well. Piazza said that the middle school groups, in particular, “gobbled this up and were busy filling them in immediately.” The kids have been told they are the “eyes and ears of the school.”

Piazza described how Say Something program has been implemented at Haldane, citing special “lunch-and-learn” pairings of high school and middle school students, a peer mentoring program and going into gym classes to talk more informally to small groups of students, rather than at a large assembly. The conversations, he said, extended to other areas of concern: eating disorders, bullying, even experimentation with drugs.

“I felt very fortunate to get in front of them in this capacity,” Piazza said, noting that he asked the students whether they would consider him a trusted adult. “They said no, which I totally understood. I’m new and I’m in a uniform. But the kids have many doors open to them here — Scott Many [the high school social worker], the guidance counselors and also all the families which interact in the community — I told them not to forget their friends’ parents as people they could turn to.” 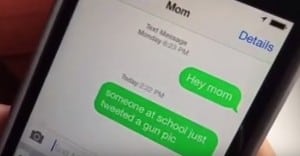 An example from Sandy Hook Promise’s website of a text that a concerned student might send to a parent.

After the presentation, one question to Haldane High School Principal Brian Alm, who was in attendance, focused on whether there were legal protocols for teachers when an issue is brought to their attention by a student. Alm discussed both the mandated reporting procedures, augmented recently by the Dignity for All Students Act, and also the more informal, confidential team approach that goes on in a small school such as Haldane, though he was careful to add that “we don’t immediately widen the circle.”

Alm explained that only two staff members, Many and the elementary/middle school social worker, Renee Curry, were bound by confidentiality regulations, and that even these regulations have a stipulation that they only apply if the safety of the student or others is not compromised, which is communicated to students. Alm said he always says to students, “The only way other kids will know you told me is if you tell them yourself.” There is also a dropbox outside of Many’s office where students can drop anonymous notes, and there will soon be, on a pilot basis, a digital version for anonymous emails. There will also be a dropbox placed in the middle school.

For more information on Sandy Hook Promise and the Say Something program, visit sandyhookpromise.org.