The Village of Cold Spring has received approval from the New York State Department of Transportation to proceed with construction for the Main Street project. Mayor Dave Merandy called it “very good news” at the Jan. 26 meeting of the village board, praising trustees Marie Early and Fran Murphy, who have worked with state officials on the project details over the past several months.

The project will improve sections of sidewalk most in need of repair between High Street and the pedestrian tunnel under the Metro-North tracks, add curb cuts to comply with the Americans with Disabilities Act and upgrade lighting along Main Street. Improvements will also be made on Furnace Street. 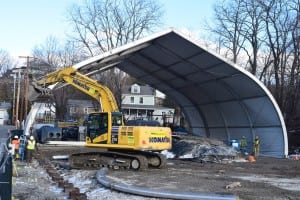 A huge tent has been erected at the Cold Spring Boat Club as part of the DEC coal tar remediation. (Photo by M. Turton)

Early said that, depending on final bid amounts, work will also be undertaken on Mountain Avenue and Fishkill Avenue. Bids will be opened on Feb. 22 at village hall, with construction expected to begin by spring. The village had applied for funding for the project 10 years ago during Anthony Phillips’ term as mayor.

Some Haldane parents raised concerns with the board about pedestrian safety in the area of Mountain Avenue, Locust Ridge and Craigside Drive, where many students are dropped off for school each morning. 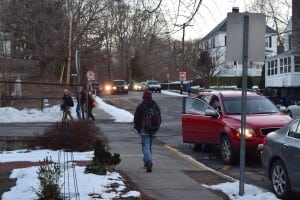 Parents are concerned about safety in Mountain Ave area where students are dropped off each morning. (Photo by M. Turton)

Heather O’Neil, Heidi Stephens and Kathleen Foley, a member of the Haldane Safety Committee, cited concerns with drivers who ignore stop signs, heavy traffic, confusing signage, cars blocking driveways and students being let out in areas where vehicles are not supposed to stop.

Early, who recently attended a meeting at the site with Foley and Paul Piazza, Haldane’s school resource officer, pointed out that the issues are exacerbated by the alignment of the streets. Locust Ridge and Craigside Drive intersect Mountain Avenue very close to each other, the former from the south and the latter from the north. 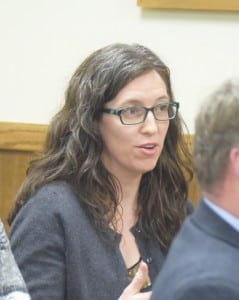 O’Neil described an incident that occurred while her husband was walking their children to school. A car that had stopped to drop off a student backed up and bumped into the stroller that O’Neil’s husband was pushing. No one was hurt, she said, but the incident underlined the seriousness of the concerns being raised. While the area includes a crosswalk at Locust Ridge, Stephens said drivers commonly ignore crosswalks throughout the village.

A number of potential solutions were discussed, including moving the crosswalk to a location west of Craigside Drive; making Locust Ridge a permanent one-way street running south, and having a police presence during student drop-off. Merandy said that in the past, the Cold Spring Police Department has patrolled the area in the morning and said he would confer with Officer-in-Charge George Kane. It was noted that while Officer Piazza had attended the site meeting, his role at the school is to patrol the campus, not nearby streets.

The mayor said a public hearing would be held if required to relocate the crosswalk, a move he described as “common sense.”

Plans moved ahead for installing a solar-powered pay station at the municipal parking lot on Fair Street. Trustees agreed with a recommendation from the parking committee that fees be set at $1 per hour, payable with cash or credit card.

No fees will be charged during the winter between 7 p.m. and 8 a.m. After some debate, the fines for failing to pay parking tickets were set at $50, $100 and $150 for the first, second and third offense. Commercial vehicles will be allowed to park in the lot but buses and campers will be prohibited.

A public hearing to address related issues will be held on Feb. 23. Early said that after the final approval, installation of the pay station would take six to eight weeks.

Trustees reviewed a proposition to be included on the March ballot asking voters whether they favor changing the date of future village elections. The draft, which was reviewed by village attorney John Furst, reads:

“Beginning in 2018, should the Village change the day of its elections from the third Tuesday in March to coincide with the regular general elections held on the Tuesday following the first Monday of November?”

Early said she had hoped the proposition could be placed on the front of the ballot to make it more obvious to voters. However, election law requires it be put on the back, a practice she said is common, especially in school board elections. The board must now pass a formal resolution within 30 days of the March election in order for the proposition to be included on the ballot. The election will be run by the Putnam County Board of Elections.

The board agreed with Superintendent of Water and Sewers Greg Phillips’ recommendation that the village purchase new cellular water meters from Badger Meter, Inc. Because Badger is the only company that offers the technology, village attorney John Furst advised that a single bid was appropriate.

The meters will cost an estimated $180,000 and replace 19-year-old devices that Phillips said are at the end of their effective life. The old meters must be read manually at each location, while with cellular technology monitoring can be done remotely. Competitive bids will be sought for installing the Badger meters in nearly 900 locations in Cold Spring and Nelsonville, including all residences and businesses. The cost of installation is estimated at $160,000, although Phillips said he is hopeful bids will come in at less than that.

No one attends hearing

A hearing was held as part of Tuesday’s meeting to give those in arrears for payment of water bills an opportunity to plead their case, but no one appeared. Cold Spring residents who fail to pay have the charge added to their tax notice but in these cases the property owners live outside the village, mainly in Nelsonville. One delinquent bill is for more than $7,000 for water supplied to four properties. The village will now send registered letters stating that the water will be shut off unless the bill is paid.