New Year’s Day often signals a fresh start. But for Cold Spring resident Joy Albrecht, January 1 was not only the beginning of a new year but her first day as a first-time business owner when she took over On The Fly, the Route 9 cycling and fitness center.

“I was at a point in my life when I wanted do something like this,” says Albrecht, 59, who moved to Cold Spring three years ago after her husband of 31 years passed away. “I fell in love with this area and wanted to get involved with the community in a real, concrete way.” 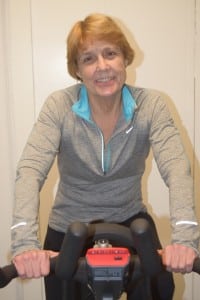 With no retail experience, Albrecht said she looked for an opportunity she had some familiarity with, and something she would value. “When On The Fly came along, everything clicked,” she said. “I had been a client there and when I heard it might be closing I didn’t want it to go away.” She does have some important expertise, she said. “I have belonged to many gyms and I know what is important to clients.”

Albrecht said her biggest challenge has been dealing with the speed at which her life has changed. Becoming a business owner “was all spontaneous and happened over a period of just a few days,” she said. “I’ve been playing catch up from day one.”

Making it her own

That has not kept Albrecht from putting her stamp on her new venture. She has continued On The Fly’s core offerings, which include personal training sessions, spinning (for non-spinners, that’s the stationary bike), battle rope suspension training, barre classes, cardio-weight training and a cardio-circuit class.

Boxing, which Albrecht notes provides a high intensity and full-body workout, will make its debut at the end of February. The program will include heavy bag work, mitt training (sparring) and jump rope. Albrecht said she has been “pleasantly surprised by the number by of women who are very excited that we’re adding boxing.” 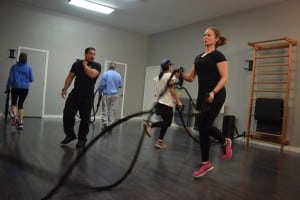 Battle ropes are a popular workout. (Photo by M. Turton)

A “flex-time cardio circuit” is also planned and will allow participants to arrive during a two-hour window to complete their workout.

Also in the works is a “boot camp” that will put clients through two workouts a week for six weeks. That program will include cardio drills and muscle conditioning aimed at building strength and endurance.

Albrecht hopes to make participation an easier fit into residents’ schedules. “One of the benefits of being small and local is that we can be very flexible, so we’re experimenting with how to use our bikes more effectively,” she said. “Walk-ins are welcome and can join an existing class as long as there’s a bike available.” She is also looking into other ways to open up the schedule for those who have not pre-registered for classes.

The competitive nature of the fitness industry doesn’t seem to faze Albrecht. “We’ll never be an Allsport or Gold’s,” she said. “My goal is to offer a high quality fitness program close to home” in Philipstown. “We’re close by and easy to get to. I know that if there’s traffic involved in getting to the gym, I’m the first not to go.” 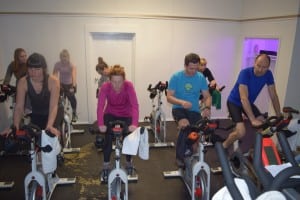 Programs and classes are offered seven days a week between 7:15 a.m. and 8 p.m. “Occasionally we have workshops that feature a specialized instructor such as a coach or a racer,” Albrecht said. “That would usually be a longer class [than the typical 45 to 60 minutes] with a different price structure.” Clients can choose from several plans. Spinners can pay by the month or by class. Groups wanting to spin together need to book in advance.

One challenge Albrecht sees is in getting a more balanced cross section of the community to take part. Female clients outnumber the men by 10 to 1. “Men don’t seem drawn to group exercise,” she said, although they do like to be challenged. “Most men would definitely find battle ropes to be a real challenge.”

On The Fly is located at 3021 Route 9, just south of Vera’s Philipstown Market, in the same building as Best Blue Print and Garrison Tree Service. The first visit is free. For more information, visit ontheflycyclingstudio.com or call 646-580-8241.