Beacon City Council member Ali Muhammad, a Democrat who represents the 4th Ward, turned heads last year when he urged the Beacon Democratic Committee to not field a candidate for mayor and instead support incumbent Randy Casale, a member of the Independence Party. The committee declined and endorsed former Dutchess County legislator Ron Ray as its candidate.

Although Muhammad proceeded to petition for Ray, he publicly endorsed Casale, as well as Republican Marc Molinaro for Dutchess County Executive and Independence Party member John Foreman for the county legislature.

That didn’t sit well with the Dutchess County Democratic Committee, of which Muhammad is a member. In August 2015, he was called before the committee, accused of disloyalty, and censured.

“It was basically a slap on the wrist and a written reprimand,” he told The Paper/Philipstown.info. “But I continued to do what I do because I don’t think I’ve done anything wrong. I’ve been extremely loyal to the people who I serve. I’m not the type of person to be quiet.”

After the hearing, Muhammad, continued to endorse Casale, Molinaro and Foreman. In November, Muhammad (who was himself running for re-election), Casale and Molinaro all won by substantial margins, and Foreman defeated Democratic challenger Tony Sciarrone by fewer than 20 votes. 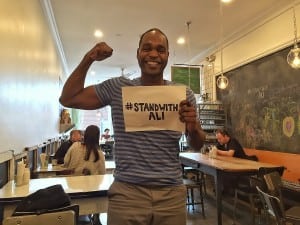 Now, Muhammad has been charged with disloyalty for a second time. If found culpable, he could be removed from both the Beacon and Dutchess County Democratic committees.

At the heart of the issue are the by-laws of the Dutchess County Democratic Committee, which state that committee members cannot support candidates who are not Democrats. Muhammad said he was initially unaware of this “disloyalty clause” but even had he known about it, he still would have offered his support to Casale.

“I didn’t feel that Randy Casale had to be the best Republican or Democrat,” he said. “I felt like he just had to be the best candidate for the job. And I didn’t see anyone out there in the political landscape who was better. I understood after that that I was going against the by-laws. I wasn’t trying to cause a ruckus. I just felt that I was doing the right thing by the people. And if that’s the platform that we want to push, then let’s get enough people in here so that we can change those by-laws.”

By contrast, the loyalty clause in the by-laws for the Dutchess County Republican Committee states only that members may not donate to candidates outside the party, although they are free to endorse anyone, according to Justin Riccobono, the chair of the Beacon Republican Committee.

“You’d get a lot of stink-eyes across the room, but you wouldn’t be bounced from the committee for that,” he said. “And it happens. People have done it in the past.”

Pam Wetherbee, the chair of the Beacon Democratic Committee and member of the City Council, said in a statement that committee members who wish to support outside candidates must resign from the committee.

“This is the normal way most committee people resolve the conflict between their personal preference and their obligation as a committee member,” she wrote. “Resigning to resolve the conflict is not uncommon and we had a member do it in the past election. The resignation is often accepted without prejudice to re-joining the committee. Charges for removal rarely occur because most people take the honorable way to resolve conflict of strongly held personal preferences and committee obligation by resigning.”

In a follow-up interview, Wetherbee said that Muhammad was asked to resign from the committee if he wished to publicly endorse Casale but declined. She also pointed out that being removed would not mean that Muhammad would be removed from the city council or even from the Democratic Party.

“Even if he was no longer part of the committee, he could still run as a Democrat in the future and even ask for our endorsement,” she said. “This has become a bigger issue than it really is.”

Mayor Casale said the conflict is “one of the reasons why I’m not a big fan of party politics. I always felt that they find ways to ostracize you if you don’t march to the beat of your party’s drum. I learned that the hard way, which is why I’m part of the Independence Party now” after leaving the Republican party.

Casale also said that while Muhammad could run as a Democrat no matter what happens at the hearing, campaigning is easier with the support of the party. “It’s tough if you don’t know all of the election laws and you don’t have someone to help you get through them,” he said. “But I believe this will work out for Ali because no matter what happens in the hearing, he still has a strong voice in the community.”

He plans to fight the charges because “it’s a tarnish and it looks bad. Anyone running against me in the future could bring it up. Is it the end of the world? No, but what am I being punished for, truly? It’s not a good look and I don’t believe that it’s warranted.”

The hearing is scheduled for 7 p.m. on Tuesday, March 29, at the offices of the Dutchess County Democratic Committee in Poughkeepsie. Although it was not clear at press time if the hearing would be open to the public, Muhammad said that he would “bring as many people with me as possible, even if they have to wait outside. We’re bringing the house down.”

One thought on “Crossing a Line”