On April 1, 1966, the village of Somers held a Circus Stamp Day parade to celebrate a commemorative U.S. Postal Service circus stamp and special cancellation. The 50th anniversary of the parade and stamp will be celebrated on Saturday, April 2, with a noon dedication of a historical display at the post office, followed by a procession to the library for a 1 p.m. reception organized by the Somers Historical Society. 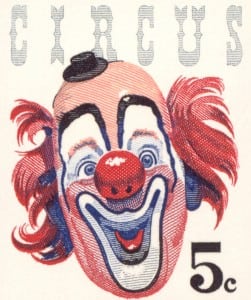 After the USPS announced in early 1966 that it would issue a five-cent stamp to honor Delavan, Wisconsin, a wintering spot in the late 19th century for more than 20 circuses, Somers town historian Otto Koegel appealed for the agency to recognize Somers, where the traveling menagerie flourished in the early to mid-19th century. The town was not given a stamp but was granted its own cancellation for six months. The USPS also unveiled the stamp in Somers on April 1, 1966, a month before Delavan’s unveiling.

Three thousand people — roughly half of Somers’ 1966 population — attended the parade. The circus clown stamp that started all the fuss is now only worth about a buck, but Somers has become known far and wide as the “Cradle of the American Circus.” For more information, call Jo Pitkin of the Somers Historical Society at 914-277-4977.