The Highlands Current won three awards during the annual conference of the New York Press Association (NYPA), a trade organization for some 500 weekly newspapers in New York state.

The awards, attributed to The Paper, the publication’s former name, brings to 16 the number of prizes won by the paper since its first year of eligibility in 2013. Entries in the NYPA’s Better Newspaper  Contest are judged by weekly newspaper editors and staff from another state.

The awards included third place in the news category for papers with circulations of 4,000 or less for a July 17 story by Liz Schevtchuk Armstrong on the issue of naming the planned county senior citizen center at the Butterfield development for Roger Ailes in light of a county law that prohibits using the names of living people.

Contributor Ross Corsair won second place in the art photo category for newspapers with circulations under 5,000 for his image of a lone kayaker amidst the Hudson Highlands. One judge wrote: “Very nice photo. I think the composition was very well done. And what a gorgeous color sky you had to work with! The overall feeling, I got from viewing this picture was peace and serenity. Well done!” 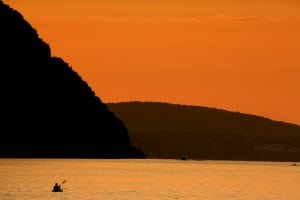 As they have in the past, advertising director Michele Gedney and layout editor Kate Vikstrom won recognition for a page of advertisements designed to promote local businesses, receiving an honorable mention in the Multi-Advertiser category among newspapers with circulations of less than 8,000. “Nice clean ads that depict all sorts of shops,” said the judges.

The two-day conference in Saratoga Springs, attended by Managing Editor Kevin E. Foley and Gedney, included numerous workshops on editorial and advertising issues for both print and digital newspaper operations.

The keynote speaker at a luncheon on Friday, April 8, was Preet Bharara, the U.S. Attorney for the Southern District of New York. The federal prosecutor is well known for his office’s obtaining criminal convictions against more than a dozen state legislators, including its two leaders. Bharara spoke of the importance of local journalism to keep citizens informed about government and provide a check on abusive practices.