Can anything top the Cold Spring sycamore?

On Arbor Day (April 29), The Highlands Current announced its picks for the five best trees in Philipstown. Each is magnificent in its own way, but the giant sycamore behind Foodtown at the end of Marion Avenue in Cold Spring was selected as the single greatest in the town based on its immense stature, impressive branch structure and inherent beauty. 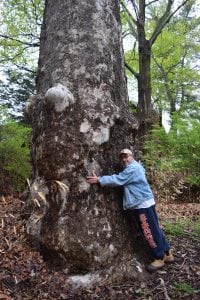 It  would take several Joe Curtos to properly hug the best tree in Philipstown. (Photo by M. Turton)

The massive Platanus occidentalis is well established behind the home of Joe and Cathy Curto. Joe, a businessman and former president of the Haldane School Board, described the pride of his backyard this way: “It’s pretty big.”

We decided to quantify Joe’s rather subjective comment. With two people holding the tape, the sycamore measured 23 feet in circumference at chest height, or 7 feet 4 inches in diameter. To put that in perspective, the Los Angeles Lakers’ star Kareem Abdul-Jabbar was a mere 7 feet, two inches tall.

The challenge to find a tree greater than Joe Curto’s pretty big sycamore continues. William Erichson, commenting on Facebook, suggested that the “ultimate tree is up in Cornish Estate just before the lake at the top,” while at highlandscurrent.com, Stephen Rose wrote, “Don’t forget that huge white oak visible from the Boscobel grounds looking north in the open field.” Further nominations are welcome.