From architecture to jazz dance, workshops expose a grade to the breadth of the arts

Now in its third year, Haldane’s Grade 5 Arts Alive! Day afforded the entire grade an opportunity to sample multiple art forms while navigating the hallways and switching classrooms in a preview of what awaits them in middle school next year. Once again this community, well-stocked in artists of different stripes, was tapped into, as artist/parent hybrids introduced students to new ways of perceiving and creating.

Students were asked to list their choices in order of preference, and most got a lot of what they wanted and a little of something perhaps less familiar to them. The three rotations included many returning artists: Dani Locastro teaching textile design; Laura Danilov using group exercises to work on singing technique; Ivy Meeropol, along with Rudy van Dommele filming a home-grown cinema-verité documentary behind the scenes at the Haldane cafeteria; Steve and Mary Bates working on figure sculpture in clay; Lisa Sabin and the kids improving up a storm and Haldane Arts Booster Club president Katie Bissinger teaching them the rudiments of tap dancing. Former Haldane librarian Juli Hoffman returned to the school to once again demonstrate aerial circus arts. 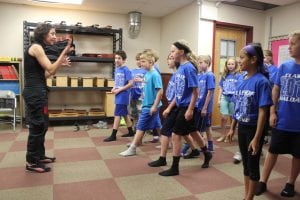 Creative writing was the focus of two workshops. In one, writer and professor Kathy Curto assisted the kids in “telling their stories” via the SMITH Magazine Six-Word Memoir approach. In the other, literary agent Heather Schroder, who works with authors from many genres — adult literary fiction to children’s books — helping them shape their manuscripts, jumped in earlier here, before the works were even created. Her workshop invited participants to “explore your world and create new worlds, time periods, peoples and creatures … if you can imagine it, you can write it.” 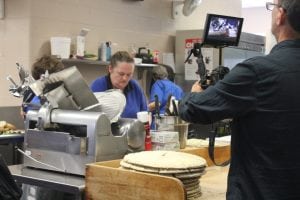 After asking students what their favorite book was and receiving different answers, Schroeder pointed out that each “started in someone’s imagination.  As different as all of you are, you all have imagination, and writing fiction is about putting imagination into words. We’re going to explore how imagination can inspire us to work.” Providing a verbal prompt, she followed that up by distributing four cards to each student, two relating to character and two to the world in which that character lives. Urging the kids to “resist the urge to write something ‘nice’” Schroder suggested instead to “draw them in your mind  and then use your words. Think about what they ate for breakfast.  Do they like to eat vegetables — or people? Do they live on this planet, or another? Whatever you’re imagining, go with it.”

Pens met paper for a stretch, as these new universes emerged.  Breaking from the writing briefly, some described their creations: “It’s a world of cannibals, on another planet, but it looks just like this one,” and “My characters are chickens, who talk.” Suggestions were then given to first introduce another character into your world and to consider the biggest challenge your character faces. “He has to go back into his lunchbox, alone” was one of these, from one student, who later added, “It’s more about the lunchbox than the actual person.” All ideas and plot developments were encouraged. 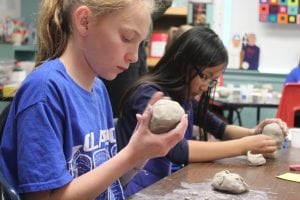 After a few more suggested prompts, writing was done for the time being; writers could either bring their stories home to continue, or hand them in, to be bound together in a book. “What’s great is,” Schroder told the class, “before you sat down, these characters did not exist, and now they are real to you.  Listen to how you talk about them.” Finishing the session off by reading a couple of pages from what was her favorite book at their age, Madeleine L’Engle’s A Wrinkle In Time, Schroder concluded by asking the writers what they were able to deduce from just a short passage. “It’s stormy; She has a lot of self pity; Her father disappeared …” the replies came tumbling out. “Look all at you know, from just that,” Schroder noted, before the bell rang and they all headed out for more arts action.

In reflection, afterward, Schroder described it from her perspective: “The kids were great. After 10 minutes of writing with a prompt they could each describe their character, and after another 10 they could tell me what their character wanted. They could build a world. By the end, almost all of them felt they could do it.”

Any parent or community member interested in conducting a workshop next year should get in touch with the Haldane Arts Booster Committee over the winter.