“I keep my heart open by listening”

You clasp a Grammy Award in your hands, for a few fleeting seconds imagining your name etched on the gold-plated gramophone trophy. For Cold Spring’s Leo Sacks, that’s no flight of fantasy. His name can be found on the Grammy he brought along to Haldane last Friday, when he taught a class called “Musical Trees.” A group of awe-struck fifth graders was able to hold the award individually, something Sacks allowed them to do, hoping that tactile, tangible moment would touch that “this can really happen” nerve. Sacks’ “Best Historical Album” Grammy was awarded to him in 2014 for producing the 9-CD “Bill Withers: The Complete Sussex & Columbia Albums.” He currently works as an A&R consultant and producer for Sony Music Masterworks. 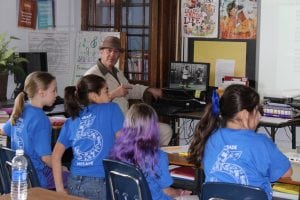 In over two decades as a music producer, Sacks has produced boxed sets of such artists as The Isley Brothers, Earth, Wind and Fire, Aretha Franklin, and other giants of soul and R&B. He’s done a lot of other things, too, spending much of the 1990s as an editor, writer and producer at NBC News. Earlier he wrote and reported for newspapers and music trade papers. Having helped some of America’s most influential artists “preserve their life’s work as a living language,” as he describes it, Sacks calls it “a privilege and also a tremendous responsibility” to discover new artists. Sony doesn’t need me to help them find the latest beats. Somewhere there’s a singular voice, or a boundary-busting band that’s utterly fearless, or a writer with a passionate point of view, and they’re not on TV. So I keep my heart open by listening and wondering whether anyone else will feel what I’m feeing. Scouting, signing and recording an artist may have satisfied the old business paradigm,” he adds, “but in today’s business of music, the real A&R job begins once the artist leaves the studio. It’s about formulating a plan that clearly communicates the story of any new project. And I love a good story.”

Those good stories harken back to the years Sacks spent as a newsman. “I always wanted to know how many slugs did the perp fire? Why did she lead a double life?” he exclaims. His news reporting slid into music business scribing. As he himself bylines, “I’ve wanted to make records ever since that magical, mysterious Sunday night in the winter of 1964 when the Beatles unleashed all those pent-up feelings on the Ed Sullivan Show. By that time I was tall enough to turn on the radio and was forever touched — and haunted by the voice of Levi Stubbs and the street lamp harmonies of the Four Tops singing Reach Out, I’ll Be There. I didn’t know he was singing to his buddies in the foxholes of Vietnam. But it made me want to become an artist’s advocate and write about the music that was touching me, and it kindled my appreciation for music journalism. In that respect, I was following in the tradition of music journalists who became record producers: John Hammond wrote jazz reviews before he discovered Benny Goodman, Count Basie and Billie Holiday. Jerry Wexler coined the term ‘rhythm and blues’ as a writer for Billboard before he joined Atlantic Records and produced Ray Charles and Aretha Franklin.” 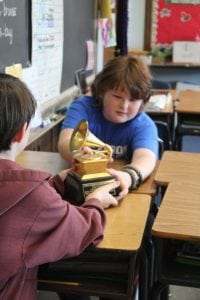 More recently, Sacks has fused parts of his past together, teaching a class this spring on “Writing For Media” at Rutgers University’s School of Communication. Despite having to depart his home at 4-something a.m. to make it there, Sacks felt honored to teach it, considering it a way of “paying it forward. What I found there with the students was a really impassioned group that couldn’t write. I thought ‘I can’t teach them how to write, but I can teach them how to think critically.’ I taught them how to look at front page and recognize political agendas, to notice what was put in there for a visceral feel, what was titillating.”

A legacy of teaching and music

Sacks loved teaching the class, considering it a legacy passed down from his father, a teacher and child psychologist. “My parents were both working class children of immigrant grocers. They wanted me to excel in school, and also nurtured my love of music,” he recalls, remembering clearly that “when I was seven, I was handed Meet the Beatles and Herb Alpert’s A Taste of Honey.” Now Sacks has a son nearly that age, and feels “a profound gratitude for the gifts that I’ve been given, starting with my parents. If I can gently encourage young people, that’s where it’s at.” He has enjoyed sharing his knowledge and experience at Haldane, too, first in a Pathways to Success talk with ninth graders. “Living in Cold Spring, among so many dedicated people who share the same goals and aspirations for our children, has been an incredible blessing. The teachers at Haldane are an incredible group of nurturing souls who have strengthened my own desire to pay it forward,” Sacks enthuses.

In his Musical Trees class Sacks wanted, first and foremost, to see the direct links between some of the artists Haldane students listen to today, with those in the near and distant past. “Your favorite artists have their own favorite artists. Who were their inspirations?” the class description read. Connecting Beethoven to the Beatles, Big Mama Thornton to Elvis Presley, etc., Sacks made stops along the highway of rock ‘n roll history, showing the students footage of artists like Jerry Lee Lewis while handing them some background: “He caused pandemonium — he played with his feet, his elbows! He was writing about what he knew: things like chickens!” Sacks also addressed the importance of learning sentence structure, as a prelude to writing more ‘conversational’ lyrics: “Once you learn the rules, you can break the rules” he explained. And, perhaps surprisingly, a lot of the students knew who Bill Withers was, being most familiar with Lean On Me, adding to the Grammy-handling excitement. 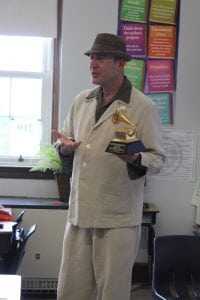 Leo Sacks, holding his own Grammy award, during the class he taught at Haldane’s Arts Alive! (Photo by Katie Bissinger)

Along with teaching and his A&R work, Sacks has, for the past few years, been trying to finish a documentary film he has been making about Raymond Myles, a New Orleans-based gospel singer whose CD Sacks financed, produced and independently released in 1995, only to be met with refusals to play it from the evangelical radio stations, based on the perception that Myles was gay. Tragically, Myles was carjacked and murdered in 1998. Years later, Sacks says, “When the levees breached in New Orleans in 2005, I felt powerless to help the city that I loved. So I formed the New Orleans Social Club and co-produced a benefit CD in Austin called Sing Me Back Home. This was literally six weeks after the storm and some of the artists weren’t sure they still had a home. All the musicians there knew Raymond. He should have been there, and yet he was, in spirit and in memory. That’s when I decided to make a documentary about his complicated life and legacy.” In fits and starts ever since, the documentary, A Taste of Heaven: The Heartbreak Life of Raymond Myles, Gospel Genius of New Orleans, until now self-financed (Sacks has recently received enthusiastic support from the Southern Documentary Fund, which will allow him to film more interviews), has come together, and Sacks continues to persevere with it.

There are always new artists to discover as well. As Sacks notes, “It’s great to be a tastemaker at 60.”