Letters from a prisoner to a friend

The Beacon Hebrew Alliance and the New York Campaign for Alternatives to Isolated Confinement will present a performance at 7 p.m. on Wednesday, June 8, of Mariposa & The Saint: From Solitary Confinement, A Play Through Letters. 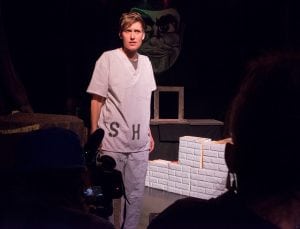 In 2012, Sara (Mariposa) Fonseca was sentenced to 15 months in isolated confinement. Years later, she is still there. Through letters written to a longtime friend and collaborator, Julia Steele Allen, Mariposa brings her experiences to the stage. The performance, which stars Allen and Ray Huth, is directed by Noelle Ghoussaini and stage managed by Michi Osato.

The show is touring eight states, including New York, that have legislation or campaigns to limit or end long-term solitary confinement.

A discussion of solitary confinement will follow the 45-minute performance, which takes place at the Beacon Hebrew Alliance, 331 Verplanck Ave., at the corner of Fishkill Ave. Tickets are $10 to $15 at the door, but no one will be turned away for lack of funds, and formerly incarcerated people are admitted free. (The show is not recommended for children under 14). For more information, visit juliasteeleallen.com.