Routine meeting after weeks of contention

The Cold Spring Planning Board at its meeting on June 23 approved what at times has been a contentious application for a change of use at the Butterfield redevelopment project.

Unlike several prior meetings that filled the room to overflowing and were long and often heated, the final session in the reapplication process was routine. A small audience watched quietly as board members spent most of the hour-long session verifying that revisions approved in principle at the June 10 meeting had been followed up by developer Paul Guillaro and would be accurately described in the resolution.

The key to the approval was the planning board’s willingness to grant an increase in the parking waiver, thus reducing the number of parking spaces required on the site by 20 percent, the largest reduction permitted under the village code. The developer agreed to create four additional spaces not included in the original site plan. Other revisions included signage improvements and setting aside a number of parking spaces for use by medical personnel.

The fact that Putnam County guaranteed bus service to the senior citizen center to be created at the Lahey Pavilion went a long way toward the board agreeing to reduce the number of parking spaces required. “It’s not a magic bullet,” Planning Board Chair Matt Francisco said, referring to the reduction in parking. “What we’re trying to do here is …  apply the code and not get sued.” Two weeks earlier Guillaro and his attorney Steven Barshov had threatened legal action if a deal could not be reached. 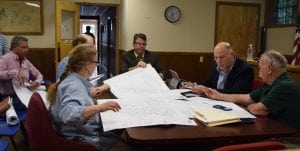 The planning board approved the change of use sought by developer Paul Guillaro (left). (Photo by M. Turton)

Francisco commented that a difference of opinion over the planning board’s jurisdiction resulted in a revised parking table not being submitted by the developer until May 20. He noted the board’s work on the application was done in three meetings once all required information was received.

Village building inspector Bill Bujarski must now determine if alterations to the exterior of the Lahey Pavilion trigger a review by the Historic District Review Board. The pavilion was not included in the original approved site plan for Butterfield but was added to the project as the location for the senior citizen center. The medical offices now located in Lahey will move to the project’s Building Number 2.