It’s the little touches that ultimately keep things interesting at table. Condiments and flavorful garnishes: versatile, flexible and adaptable. Sometimes the simplest culinary idea from an exotic culture, when formally examined suggests enjoyment far beyond its use. This is not appropriation; rather, it’s adaptation.

Take dukkah (also known as duqqa or du’ah), a dry, crumbly Egyptian blend of roasted or toasted nuts, seeds and spices. (The name is the Arabic description of the process of its manufacture: “to pound” or “to crush.”) Dukkah’s crunch and intense flavor make it both a great snack food and condiment. It is most commonly eaten with breads or flatbreads —sprinkled on top or with the bread first dipped in olive oil and then dredged in the blend. 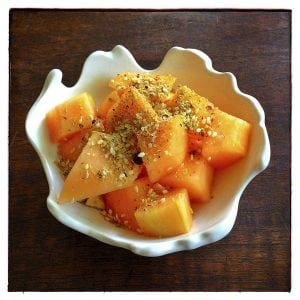 Egyptian-born food writer Claudia Roden is universally acknowledged as popularizing the basic ur-recipe (her mother’s!) in her 1968 classic, A Book of Middle Eastern Food. For some reason, Aussies and Kiwis were the first to heartily embrace Roden’s culinary diaspora and have developed a serious culture of the blend. But contemporary chefs such as  Yotam Ottolenghi and Ana Sortun have further promoted and updated this Middle Eastern staple for Western palates.

And just as the list of ingredients suggests endless variation, an extensive menu of uses has come into being:

The exceptional adaptability of dukkah’s crunchy taste and texture suggest seasonal or regional variations: maybe a Tex-Mex version to finish the end.

Preheat oven to 350 degrees. Roast nuts on a baking sheet, in individual batches, for about 10 minutes, until golden. Be careful not to burn them. (Hazelnuts need be skinned after roasting. Wrap nuts in a kitchen towel and let them steam for 1 minute. Rub them in towel to remove loose skins.) Cool completely and coarsely chop by hand or pulse in a food processor or grinder and reserve.

Heat a small skillet to medium-high and again in individual batches, toast the seeds, shaking the pan or stirring constantly until each is fragrant and just starting to smell toasted (about 2 minutes each for the cumin and coriander; 3 to 4 minutes for the sesame seeds.) Remove from the pan and cool completely.

Pulse the nuts and seeds in a spice mill or grinder to a coarse powder. Sesame seeds may be used whole or partly ground, but be careful not to reduce them to a paste. The final mixture should be relatively dry and crunchy. Transfer all ingredients to a bowl and stir to combine and season with salt, pepper or sugar as per the ingredients list. Dukkah may be kept up in a jar in the freezer for up to a month.