As Cold Spring’s Main Street Project nears completion (work on Furnace Street will begin July 11), how the new sidewalks are being used by village shop owners remains a thorny and complex issue.

In a letter to store owners on Main Street, Mayor Dave Merandy reminded store owners that, according to the village code, they cannot display merchandise more than three feet beyond the front wall of the store. At some shops, sandwich-board signs, tables, chairs and merchandise crept well beyond that limit. While the law is clear, the threat of paying a fine of as much as $250 or the theoretical possibility of spending up to 15 days in jail did not sit well with some merchants.

“There are too many laws and regulations for this tiny village,” said Patty Villanova, owner of Side Effects/NY Boutique at 137 Main. “They shouldn’t be wasting time on this nonsense.” 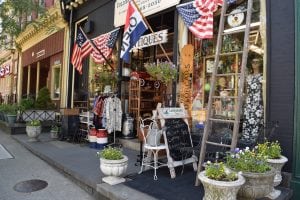 Some stores have concrete stoops which are still considered by the village law to be part of the sidewalk. Merchandise must be kept within three feet of the shop’s front wall. (Photo by M. Turton)

Caryn Cannova, owner of Kismet at Caryn’s at 72 Main, agreed. “I am so angry at the mayor for how he has handled this,” she said. “He told the police flat out he wants merchants ticketed. He is so anti-merchant, it’s frightening.”

Not everyone sees it that way, of course. Leonora Burton, the longtime owner of The Country Goose at 115 Main, said she supports enforcement of the three-foot law. She said enforcement had all but ceased and some businesses took advantage. She said that at times it had become difficult for pedestrians to navigate the sidewalks, especially those pushing strollers or wheelchairs.

The law is designed to protect pedestrians in part because the village could be held liable for injuries on public sidewalks. The village owns not only the sidewalks but also most of the stoops, porches and patios along Main Street, as well as the benches and trees, all of which come into play with foot traffic.

The issue is complicated by the fact that Main Street sidewalks vary greatly in width. No two blocks are the same. In front of the Garden Café at 116 Main, the sidewalk is more than 17 feet wide. Just across the intersection the sidewalk in front of the Hudson Hil’s Café & Market is less than six feet in width. 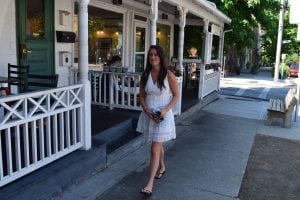 Stoops and porches further complicate matters. The porches at Hudson Hil’s and the Silver Spoon Café at 124 Main are owned by the Village of Cold Spring. Both extend beyond three feet from the front wall of the building and technically speaking may be in violation of the law. 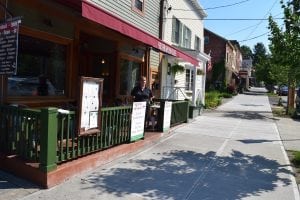 The porch at the Silver Spoon sits on village-owned property. (Photo by M. Turton)

A number of shops also have slate patios. Slightly raised, they are separate from the sidewalk. Even though most are six feet or more in width they fall under the three-foot limit for display of merchandise. Some shop keepers feel the entire patio could be used to display goods since they are not part of the pedestrian walkway. 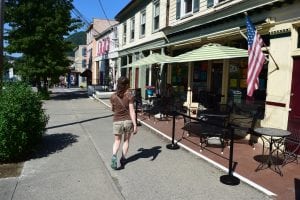 The patio at the Cupoccino Café at 92 Main is one of the thoroughfare’s many anomalies. Slightly more than six feet wide, it was “grandfathered” when Jesse Arguello and her husband John bought the business several years ago, allowing them to use it as a small seating area beyond the three-foot limit. Arguello said that the café’s certificate of insurance removes the village from any liability.

Turning the law inside out

Villanova believes the law should allow sidewalk signs and merchandise within four feet of the front of the building “whether it’s the structure, a porch or a stoop.” Cannova, while clearly unsatisfied with the situation, is less definitive. “Each shop has different configurations,” she said. “If there are going to be sandwich boards, there should be criteria for how each one looks. But again, that gets murky. Honestly, it’s just common sense on what works and what doesn’t. But that seems to have gone by the wayside as well.” 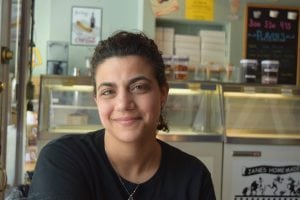 Cupocinno’s Jesse Arguello may be onto something. (Photo by M. Turton)

Arguello pointed to a possible approach that would turn the existing law inside out. “No two sidewalks are the same width,” she said. “Perhaps the code could be written in such a way that it requires a certain width of the sidewalk to be left unobstructed,” rather than restricting merchants to the use of only three feet. She suggested that the mandatory width be adequate to allow four pedestrians to walk side-by-side.

Merandy told The Current he is “absolutely” open to examining the village’s sidewalk issues, adding that Arguello’s approach may be a good way to rethink the three-foot law.

The mayor also said that municipalities such as Cornwall charge a fee for outdoor dining areas located on municipal property, something he feels Cold Spring should consider for restaurant porches. He said the village needs to have an assessor determine price guidelines for the possible sale of porches owned by the village. Hussein (Jimmy) Abdelhady, owner of the Silver Spoon, has expressed interest in purchasing his porch. Many residences also have porches located on village property.

Lynn Miller, co-owner of GoGo Pops at 64 Main, is experiencing the three-foot law firsthand, and because she is also a member of the village board, the spotlight shines a bit brighter on her. 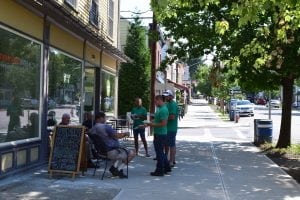 The sidewalk is more than 17 ft wide in front of The Garden Cafe. (Photo by M. Turton)

Responding by email, Miller said she is  “not trying to skirt the law by using my position to get around the 3-foot display restriction.” She explained that the tables were placed over steel basement doors because in the past pedestrians had tripped on the hinges.

Miller also pointed out that she put a bicycle and sandwich board on the west edge of the raised stoop at Gallery 66 NY, adjacent to GoGo Pops. They also extend more than three feet from the building. She said that was necessary because pedestrians had also tripped over the edge of the stoop.

“We chose to position our sidewalk sign and chairs to prevent injuries to pedestrians,” she said. Measurements taken by The Current showed that GoGo Pops’ tables and chairs extend five feet from the building. Between the tables and chairs and Main Street the open sidewalk is nine feet wide.

In an email Merandy commented further, saying “any changes made to our code would have to be very detailed. If we extend the distance, there has to be a minimum-clear pedestrian walk. That would have to be clear in the code.”

He added: “I’m fine with restaurants having tables on the sidewalks if they are kept tight and there is plenty of sidewalk left,” he said, using Cold Spring Pizza and the Garden Café as examples. “But I’m dead against having merchants stack their wares up all over the sidewalks past three feet.”

The Code Update Committee is revising much of the existing village code but the section dealing with sidewalks is not currently being reviewed.