“I liked the spot.” It was as simple as that for Jim Ely, who always seems to have “owner of Riverview” attached to his name. Now he, along with his wife, Lori, may gain another attachment, “owner of The Yankee BBQ” as his second dining establishment has just opened, on the grounds of the Fishkill Golf Course just south of Home Depot along Route 9.

Knowing the long-available space could be fine-tuned to suit his concept for a new place proved irresistible for Ely, despite the demands of running Riverview. 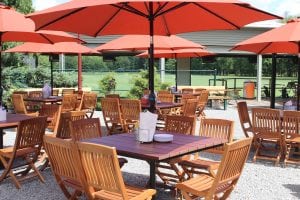 “This place lends itself to the concept,” he says, the concept being quite different to Riverview’s fine dining. As Ely describes it, “Basically it’s a beer garden/barbeque with a casual, social atmosphere, communal tables, an approachable, inexpensive menu and bar, plus live music. It’s also multi-usage: an event space, dining space with entertainment.”

Right now there’s not much signage — it’s coming — but at the turn-off for the golf course just head down to the parking area and look for the green awning to an entrance at the side of the clubhouse building. A large, decorative gate is adjacent and reveals many outdoor tables.

The name Yankee stems from the site’s association with Revolutionary War history. “The whole area was a munitions depot for soldiers and a road ran through it, closer than 9D is now,” Ely explains.

Entering the interior, one steps into the bar area; off to the right of that is the indoor dining room, modeled, Ely relates, after Gus’s Antique Bar, which was located in the Hudson View Inn, now the site of the Hudson House. 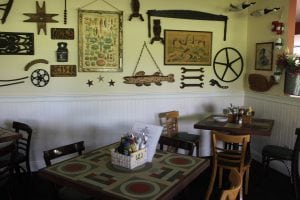 The inside dining room at Yankee BBQ is modeled on Cold Spring’s Gus’s Antique Bar, which closed down in 1980.  Table painting is by artist Cassandra Saulter.  (Photo by A. Rooney)

“It was one of the oldest inns in America and was frequented by West Pointers, and so it held a lot of antiques because they’d bring things in and leave them there — it’s been gone since 1980.” The walls are decorated with artwork and period décor, while the tables are more contemporary, with painted designs which still somehow echo the ambiance, from Cold Spring artist Cassandra Saulter.

Still, most of the action is outdoors. An outdoor bar with numerous stools to perch on is close to a cluster of six-seat umbrella tables. There are about 20 draft beers, including an assortment of local brews like Southern Tier Hop Sun, Farmer’s Daughter Pale Ale, Czechr’d Past from Chatham, Newburgh Cream Ale and Confusion, from Beacon’s 2Way Brewery. These are joined by others from around the country as well as Delerium Tremens from Belgium. Full, engaging descriptions of each are found on the menu. There is also a full range of beer in cans, priced from $4 to $7.25, nearly all manufactured in the U.S., with a few interlopers from Canada and Germany. A Magners Cider from Ireland rounds things out.

As for the food to go with the drink, there’s more than one associates with barbeque. It’s more of an outdoors, largely from the grill kind of menu, with five types of burgers (one’s a veggie), four types of hot dogs and sausages, fish, steak and vegetable tacos and even steamed mussels in a coconut curry broth joining more traditional barbeque staples like pulled pork and beef brisket sandwiches, BBQ chicken, and baby back ribs. 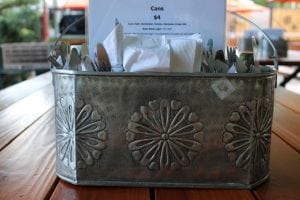 A basketful of BBQ essentials: napkins, cutlery and the extensive beer list, draft and cans.  (Photo by A. Rooney)

There’s a bit of an international bent, with poutine, pierogis, pork tamales and German potato salad making appearances along with an arugula salad with watermelon, feta and a basil vinaigrette. Prices, dependent on portion size, fall mainly within a $4 to $14 range.

Ely calls the golf course owners, Jack Villetto and Co. “very helpful in contracting this whole project. He also praises Den Anderson, at Super Space forge in Newburgh, for his painstaking work rebuilding the ornate entry gate. Other furnishings, including benches and planters, were constructed out of repurposed wood and other materials by Ely and his staff.