Sometimes it pays to take a step back from an ingredient or preparation you think you’ve got all figured out. Take pesto (from the Italian verb pestare, for pounding or crushing), the ubiquitous green paste popularly identified with the region around Genoa, Italy.

Pesto is among Italy’s oldest recipes, with culinary roots going back as far as ancient Rome. An historical Roman comestible called moretum was made by mashing together garlic, salt, cheese, herbs, olive oil and vinegar; in the Middle Ages a common Ligurian sauce called agliata consisted of a paste of garlic and walnuts. Pesto alla Genovese, the version we usually think of when we say pesto, is made from ground pine nuts and basil, olive oil and cheese.

But today’s offering traces its lineage to Pesto de Pistacchio Verde di Bronte, Sicily’s equally venerable green pesto, made from ground pistachios and mint or a combination of mint and basil.

Pistachios have been cultivated in Sicily since antiquity, introduced there between the eighth and ninth centuries by Arab conquerors when the Roman Empire disintegrated under pressure from invaders.

Bronte is a town/commune in the Sicilian province of Catania situated 10-or-so miles west-northwest of Mount Etna. Bronte is economically reliant on agriculture, and in particular the farming of pistachio nuts. The volcanic terrain and subtropical Mediterranean climate of the terroir give the Sicilian pistachio unique characteristics — notably an intense green coloring of the raw seeds and a highly aromatic character.

The Bronte Pistachio is listed on The Ark of Taste, an international catalogue of endangered heritage foods maintained by the global Slow Food movement. (Caveat emptor: In the case of nuts marketed as “Sicilian pistachios,” assume that the origin is actually Turkey, Iran or California — all pistachios processed in Italy are called “Sicilian Pistachios” — Bronte is a very small geographical area and the indigenous pistachios are most certainly consumed by the locals.) 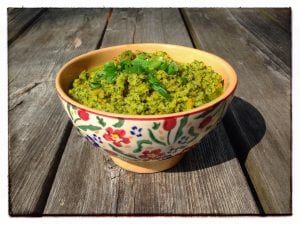 Traditionally, pistachios used in pesto are freshly picked while still green-ish and dried slightly (not toasted or roasted — in other words, raw), which enhances Pesto de Bronte’s storied bright green hue. Mint also brings out the flavor and color, but this pesto (which contains no other pine nuts or walnuts) is proportionately “nuttier” than its Genovese counterpart, typically upward of two-thirds pistachios by measure.

At table, Pesto alla Genovese is commonly used on pasta, traditionally with mandilli de sæa (“silk handkerchiefs” in the Genoese dialect), trofie or trenette. (Potatoes and string beans are also traditionally added to the dish, boiled in the same pot in which the pasta has been cooked.)

This treatment certainly accommodates pistachio pesto, but Sicily’s mint and pistachio pesto is most commonly tossed with a good long pasta such as spaghetti or spaghetti alla chitarra, which is square rather than round. Whatever pasta you use should be of a high quality, either fresh or whole-grain. And the grated cheese sprinkled over the pesto to finish should be the best available.

Such slavish historical treatment also completely neglects this preparation’s culinary flexibility. Delicate while at the same time incredibly rich, pistachio pesto is an ideal seasoning or addition to all sorts of sumptuous dishes. It can be used simply as a spread for hot or cold bruschetta, crostini, pizza or other flatbreads; it makes a sunning frame or accompaniment to raw, steamed or grilled seasonal vegetables. Try it as a flavoring and dressing for cold salads of cannellini bean or chicken. It really shines as a surprising condiment for roasted or grilled lamb or chicken.

As noted, you probably won’t be able to find authentic Sicilian pistachios; even unsalted raw nuts may be difficult to locate. But salted and lightly roasted kernels, which I found at Hannaford’s, make a supremely enjoyable approximation. Just adjust the salt accordingly. And a red-blooded Sicilian may tell you that a mortar and pestle is the only way to mash the ingredients, but a food processor makes short work of the traditional pounding and crushing.

Regardless, pistachio pesto presents an offer you really can’t refuse.

Place the mint, pistachios and garlic in the bowl of a small food processor. Pulse until coarsely ground. Add lemon juice and the oils in batches until incorporated in to a crude paste. (I like this pesto a little runny so add oil until it is to your desired consistency.) Season to taste with salt and pepper.

You can store leftover pesto in the refrigerator for up to a week. As with pesto alla Genovese, you can also freeze and store individual portions in ice cube trays.