2,200-mile journey attracts hikers from all over the country

On the morning of Thursday Aug. 4, two men sat down to breakfast outside the concession stand at Clarence Fahnestock State Park. The food this morning was especially satisfying, given that the two traveled from Georgia and were fueling up to continue their on-foot trek to Maine.

The pair preferred to be called Cruiser and Texas Hippie and no, their parents did not simply have a sense of humor when naming their children. These are their trail names: unique labels that hikers of the Appalachian Trail are given or choose for themselves to symbolize that they are leaving their normal lives behind. The idea is that hikers distinguish themselves and join the eclectic culture of Appalachian hikers. Sure, one might meet a few people named Chris on the trail, but how many people are bound to go by Cruiser? 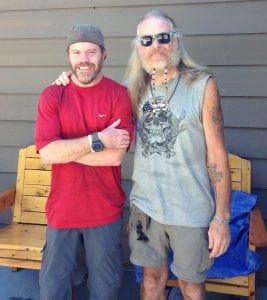 Cruiser, left, and Texas Hippie, right, outside of the concession stand at Clarence Fahnestock State Park. (Photo by C. Smith)

The Appalachian Trail is a 14-state hike spanning the Appalachian mountain range along the eastern U.S. Travelers can choose to either go south to north or the other way around, although the colder weather in the north limits the amount of time hikers have to complete the trail. Given it is the longest “hiking-only” footpath in the world, traversing the entire trail from Springer Mountain, Georgia to Mount Katahdin, Maine is considered an impressive feat. Those who complete the trail are referred to as “thru-hikers” within the Appalachian hiking community, a highly respected distinction.

While Cruiser hailed from Greenville, S.C., Texas Hippie came all the way from — you guessed it — the Lone Star state. Although they didn’t know each other before their journey, they started hiking together in West Virginia and have been together since then. They stressed that the trail brings people together and makes them feel like family. As of Thursday, the two had logged 1,421 miles and were well over halfway through their trip. 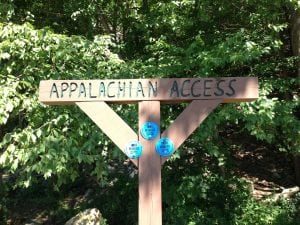 Each had a personal reason for challenging himself to such an unforgiving task. For Cruiser, this hike is a sort of redemption. He attempted the entire trail with his brother in 2005 and unfortunately twisted his ankle after 532 miles.

Texas Hippie decided to hike the trail after meeting Jeff Alt, who in his book A Walk for Sunshine recounted his own adventures on the Appalachian Trail. The book was dedicated to the author’s brother, who has cerebral palsy and inspired an annual fundraiser to support his home for the disabled. 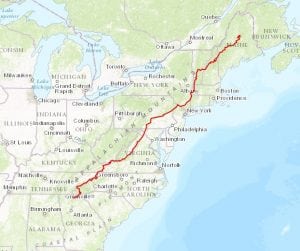 A map of the trail (source: Appalachian Trail Conservancy)

While the trail is certainly challenging, it does not come without reward. Something called “trail magic” is a widely accepted phenomenon within the hiking community. It refers to the random acts of kindness between hikers as well as lucky circumstances that can bring up someone’s mood. Trail magic can refer to anything from receiving a candy bar from a generous fellow hiker or seeing a rare animal on the trail. “It doesn’t have to be a five-star restaurant,” said Texas Hippie. “Any little thing helps.”

It is clear that a culture of giving back is important to hikers on the trail. Cruiser and Texas Hippie were humble, yet aware of the enormity of the challenge they were undertaking. They stated that it’s the people who make the journey a competition who usually fall behind. Rather than speed through, they prefer to enjoy every step.

Like Texas Hippie said, “If you’re in a hurry, you’re wasting your time.”

One thought on “Appalachian Trail Brings Unlikely Visitors to Philipstown”