The Cold Spring Police Benevolent Association hosted its third annual Cops and Rodders vintage car show on Aug. 27 at Mayor’s Park, attracting more than 100 vehicles. Among the prizewinners were Tom Scuccimarra of Garrison, Phil D’Amato of Nelsonville and Tom Allen and Larry Downey, both of Cold Spring. 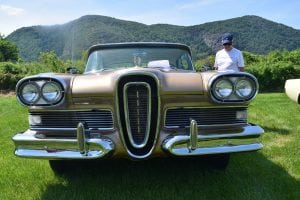 Scuccimarra’s 1958 Edsel, one of 2,535 Citation models produced, features a 345-horsepower, 410-cubic-inch engine and push-button drive located in the center of the steering wheel. 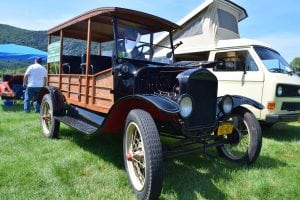 Downey entered one of the oldest vehicles, a 1923 Ford Depot Hack, an early example of the motorized “station wagons” that hotels used to transport guests to and from trains. 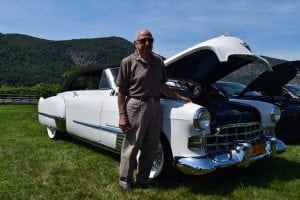 Joe Freda with his 1948 Cadillac coupe (Photo by M. Turton)

Joe Freda of Garrison purchased his 1948 Cadillac convertible coupe 35 years ago. “I like everything about it — the way it drives, the way it feels on the road,” he said, pointing out that his Caddy gets a respectable 14 miles to the gallon. 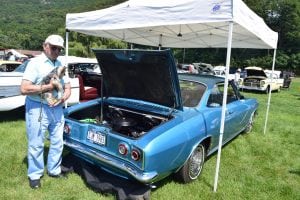 Charles Merando of Cold Spring showed off his 1965 air-cooled, rear-engine Corvair that he bought 35 years ago for $200.

CSPD Officer Tom Ciero said that the senior citizens’ center being developed at the former Butterfield Hospital site will be one of the charities to benefit from the entry fees collected from car owners at the show.