Although anyone can participate, if you live in a suburban or rural area, are retired or of that age, and enjoy nature, hiking and gardening, you fit the profile of a typical “citizen scientist.”

A number of programs in the area and the country rely on an army of these volunteers to observe wildlife and plants. Locally there are deer and turkey counts for the state Department of Environmental Conservation, invasive plant tracking and bird counts, among other projects.

“What we ask people to do is significant,” says Theresa Crimmins, assistant director for the National Phenology Network (usanpn.org), a project launched in 2009. “You have to read materials, register on the site, find species you can observe in our database, familiarize yourself with the species and then monitor it through a season.”

In seven years, the network’s 8,000 “backyard naturalists” have collected 8.5 million records about 1,100 species, 800 plants and 300 animals in every state and Puerto Rico. (The New York project is at nyphenologyproject.org). At least 25 research papers have been published using the data, which can be downloaded freely. 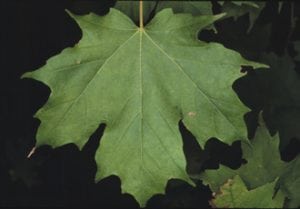 Before it launched the project, Crimmins says the network developed protocols to ensure the data would be scientifically useful, such as checks to minimize errors. “The questions are defined carefully but it’s all contingent upon successful identification,” she says. For example, “you have to know that what you’re recording is for a sugar maple, not a Norway maple or striped maple or red maple.”

The citizen-scientist program helps counter a general lack of phenological information available to researchers in the U.S. It also helps track climate change. “It has a major ripple effect in understanding what species may become dominant or potentially extinct,” Crimmins says. “Phenology is simple and straightforward — when does the plant leaf, flower and fruit — but it’s a useful indicator.”

The network’s data was recently put to practical use by University of Minnesota researchers who wanted to determine if the Twin Cities needed to start street cleaning to prevent leaves from entering the storm drains and ending up in lakes, where they contribute to algae blooms. Homeowners were enlisted to join the network and track falling leaves. National park and fish and wildlife refuges also use their data in planning.

Birdwatching for the greater good

Some of the longest-running citizen-scientist work involves birds. The Audubon Christmas Bird Count is in its 117th year; the Putnam Highlands Audubon Society has been participating for 62 years.

Project FeederWatch, overseen by Cornell University, is in its 30th year and has 20,000 participants. “We have about 70 people who have done it every year,” Project Leader Emma Grieg says of the program, which provides scientists with a long-term data set. 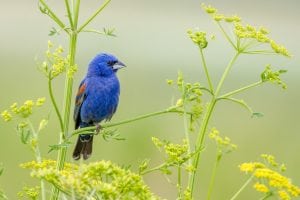 A Blue Grosbeak photographed by Mike Timmons, a FeederWatch volunteer in Indiana.

Research done with the Cornell data has investigated how bird communities are changing in response to climate change, how different diseases affect populations, and migratory changes in response to more gardens and bird feeders on the West Coast. “The scale at which you can ask questions opens a whole new set of possibilities,” Grieg says.

Smartphones have made crowdsourced science more accurate and widely available, not only because data can be submitted more easily but because observers can photograph what they are seeing.

Set up is easy. Install a bird feeder, register, get your kit and observe birds in your yard. For details, see feederwatch.org.

Invasive plant species are a growing concern. In Putnam County, the Cornell Cooperative Extension launched a pilot program in 2015 to train volunteers to look for 26 invasive species. The county has been mapped into 103 five-kilometer square blocks and more than a third are being observed.

The goal is to establish baseline data, said Jennifer Stengle, the project leader. Volunteers survey three 400-meter spots in their assigned block: along a road or parking lot with a high density of invasive species, at a trailhead and along the trail. One question is whether hikers or wildlife are inadvertently advancing invasive species. 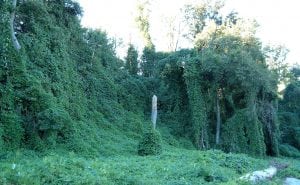 Kudzu on trees in Georgia (Wikipedia)

If a citizen scientists spots any of 13 species that have not been found in Putnam County or are only rarely seen, photos and GPS coordinates trigger a rapid response. This summer, kudzu, a fast-growing vine dubbed “the vine that ate the South,” was found in Brewster, well beyond its range.

Stengle said that it was likely planted there years ago but mild winters have now allowed its root system to become strong enough. “The vines are about 120 feet tall and several inches thick,” she said. The sighting was reported to the state’s Kudzu Team and a Lower Hudson Valley strike force to determine if it needs to be removed, which is costly and time-consuming.

For more citizen scientist projects, including those that count wildlife, visit the Department of Environmental Conservation, Lower Hudson Prism or the Habitat Network.

One thought on “If You See Kudzu, Say Something”