As the Republican Party struggled with the past and present behavior of its presidential nominee, Donald Trump, local party leaders have reacted with everything from fervent support to silence.

The enthusiasts include Putnam County Executive MaryEllen Odell, who appeared Oct. 12 in Albany as a speaker at a Women for Trump luncheon, a rambunctious affair at which attendees denounced Democratic presidential nominee Hillary Clinton, yelling “Lock her up!” and lauded Trump, whose daughter-in-law, Lara Trump, participated in the event.

Odell told the group that “as a Republican, as a leader, as a mother of two” and “friend to many, many strong and beautiful women, I’m not happy about the comments” Trump made in a 2005 video in which he bragged about his sexual proclivities and conquests. 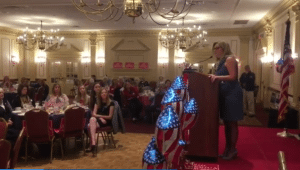 In this screen grab from a Journal News video, Putnam County Executive MaryEllen Odell speaks at a Women for Trump rally in Albany on Oct. 12.

“I find it to be disappointing – something I would say to my own son, if I had heard that he had made those kind of comments,” Odell said. However, she added, “those who live in glass houses should not throw stones. I think that is something that we can all say to our children who are looking at us, regardless of their age, over the last couple of days and in the weeks ahead and remind them that there is no one who is perfect. But someone who is passionate about their cause and their belief and certainly their country is someone that you must give respect and patience [to].”

Backing Trump “is not an easy decision for some, but it’s the right decision,” she said, because the election “is much, much larger” than the controversy over Trump. She said her support reflects “my love for my county and my country” and concerns “for those of us in the middle class and the future of our children [and] their education, their opportunities.” It is also “about the Second Amendment,” she said. “And it’s about the next 25 years of the Supreme Court.”

Odell did not reply to a message left with her Putnam County office seeking elaboration on her endorsement. 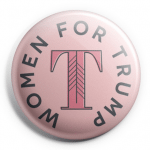 Putnam County Republican Chairman Anthony Scannapieco, who doubles as the Republican commissioner of the Putnam County Board of Elections, attended the Albany rally, which his wife, Donna, helped organize. En route back to Putnam, they said they will both vote for Trump. “Is there any choice?” Anthony Scannapieco asked. “Do I go with the thief and murderer?” he said of Hillary Clinton. “Why would I ever vote for [one]?”

Asked to explain, he said: “Yep, [she’s] a murderer, starting with Vince Foster,” a Bill Clinton aide found dead in a Virginia park in 1993. He also accused Clinton of being involved in the shooting death in July of a Democratic National Committee staffer who had leaked emails to Wikileaks. “That was an assassination,” he said. “The Clintons have no qualms about killing somebody.”

Donna Scannapieco said she regards Hillary Clinton as “corrupt.” In Albany, she cited Trump’s stance on immigration as a reason to vote for him, “because we don’t want anyone in my America, in your America, that does not get screened. We don’t want them here.”

Barbara Scuccimarra, who represents Philipstown in the Putnam County Legislature, was far less enamored. “Jesus … Oh, God,” she responded during a phone interview when asked if she would vote for Trump. “It’s a hard one. I’m a conservative Republican. Do I condone his behavior? Hell, no! It’s a very difficult time for me … tough. It’s very troubling, but I’ll stand by my party.”

She also said that “there’s a lot coming out about Hillary that’s really troubling, too.” After expressing her dismay about the presidential choices, Scuccimarra said she finds Indiana Gov. Mike Pence refreshing. “I like what I’m hearing from his running mate,” she said.

State Sen. Sue Serino, who represents Philipstown and Beacon, did not respond to a message, sent via her campaign, asking whether Trump has her vote. However, the Southwest Dutchess Daily Voice quoted her as saying that “as a woman,” she found Trump’s 2005 comments “particularly troubling. This type of behavior does not belong in politics, in business or in our society and it most certainly is not representative of my own values.” She also said she would not endorse Trump — or anyone — for president. “We have two terrible candidates,” she told the Poughkeepsie Journal. 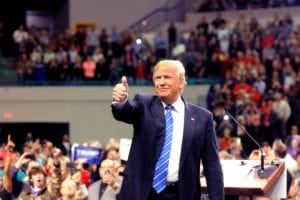 Donald Trump at a rally earlier this year (campaign photo)

Beacon Republican Committee Chairman Justin Riccobone said his committee “does not endorse presidential candidates.” He voted for Ohio Gov. John Kasich in the New York primary “but Donald Trump prevailed. I, along with most of the GOP in Beacon, will be supporting Trump.” He said they “feel that our country needs to change the path we’re currently on.” Riccobone said he found Trump’s comments about women offensive, “but we’ve all said our fair share of off-color remarks. He apologized, so let’s move on.”

Three other local Republican leaders did not respond to requests for comment: Putnam County Legislator Dini LoBue, a Republican who is a frequent critic of Odell; Dutchess County Republican Chairman Michael T.J. McCormack; and Beacon Mayor Randy Casale, who ran in 2015 on the Republican ballot line.

Meanwhile, the New York State Republican Party remains unabashedly pro-Trump. “We are proud to have our fellow New Yorker Donald J. Trump as our Republican nominee for president,” it states on its website.