It’s not a coincidence that season two of David Gelber’s Emmy-award winning series on climate change, Years of Living Dangerously, premieres on the National Geographic Channel a little more than a week before Americans go to the ballot box. The Garrison resident says he wants these stories of how the world is changing here and now to influence the election.

Although neither Hillary Clinton nor Donald Trump have made climate change a campaign issue in their stump speeches, whoever wins will be have to deal with global warming during his or her term, and one of them has dismissed it as a Chinese conspiracy.

Gelber places accountability for averting the worst climate change disasters squarely in the hands of elected officials. “The reality is that the main obstacle to action on climate in this country is the congressional Republican caucus,” he says. One episode of the series will feature Bradley Whitford, best known for his role in The West Wing, examining political will in Congress and what it takes to influence Republicans. 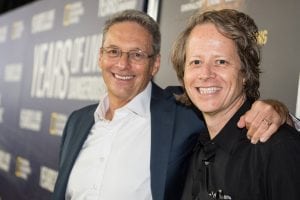 David Gelber and co-creator Joel Bach at the premiere in September. (Photo provided)

The solution is carbon pricing, or charging corporations for the right to emit carbon dioxide (CO2) into the atmosphere, Gelber says. Known as “cap and trade,” it creates an incentive for the oil, auto and technology industries to find ways to lower the amount of carbon dioxide they release because it lowers their costs.

The Years project isn’t just a television show; it’s a mission and community. The production has partnered with environmental organizations like Connect for Climate and launched social media campaigns such as #PutaPriceOnIt. “This is designed to get legislators to commit on this issue,” says Gelber. “The local and regional level is the low-hanging fruit. To get something passed in New York isn’t impossible and we could do it in many states. It’s already a reality in California and other parts of the country.”

It doesn’t hurt to have celebrities who have millions of social media followers telling the stories. Nikki Reed, from the Twilight movie series, and Ian Somerhalder, who stars in Vampire Diaries, are two of the younger correspondents in the series. Somerhalder also appeared in season one, as did other actors who are returning for the new season, including America Ferrara, Don Cheadle and Arnold Schwarzenegger, who is also an executive producer. David Letterman and Cecily Strong lead off the first episode. Actors and comedians Aasif Mandvi, Ty Burrell and Jack Black also serve as correspondents in various episodes. “The main goal is tell a good story with strong characters so that even people who don’t believe in climate change will engage,” says Gelber. 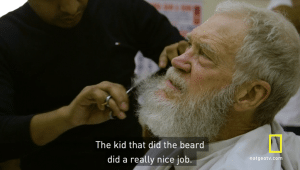 In the first episode of Season 2, David Letterman gets his beard trimmed at a barber shop in New Delhi and also discusses his love affair with solar power.

Gelber created the series with Joel Bach. They worked together at 60 Minutes, where Gelber was Ed Bradley’s producer for 25 years, and both left the show to pursue it. After getting support from producer Jerry Weintraub, director James Cameron and Schwarzenegger, they were able to recruit talent and raise money to fund the first season, which aired on Showtime in 2014 and won an Emmy for Outstanding Nonfiction Series.

The National Geographic Channel will give the show a broader reach, making it available in 145 countries. “Nat Geo has been a great partner,” Gelber says. “They really want to own this story and were willing to take risks.”

Gelber connected his experience collaborating with the team to produce the show with his work as a member of the Garrison School Board. “It really intrigues me that [Superintendent] Laura Mitchell and [Principal] John Griffiths are emphasizing project-based learning, encouraging the kind of collaborative creativity that I look for as an employer.”

Gelber says he hopes there will be a third season. “I’m in a place where this is all I want do anymore as journalist,” he says. “This story isn’t going away and it isn’t going to get better. There isn’t a single story on the planet right now that is bigger.”

The first of the eight episodes of season two of Years of Living Dangerously premieres Sunday, Oct. 30, on the National Geographic Channel. For details, visit yearsoflivingdangerously.com.

2 thoughts on “A Television Series Designed to Change the World”