Two candidates are vying for a 10-year term as one of the two justices who make up the Putnam County Court, which has jurisdiction over felonies, misdemeanors and civil lawsuits of up to $25,000. (The term of the second judge, James T. Rooney, ends in 2020.) The judges also oversee Surrogate’s Court and Family Court and are acting justices on the Putnam County Supreme Court. 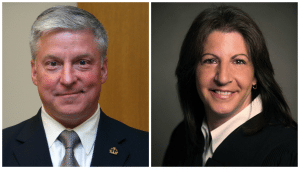 The incumbent, James Reitz, is running on the Republican, Conservative and Reform Party lines. He has been a county court judge since 2007 and presides over the County Drug Court. Before being elected to the county court, Reitz was a town justice in Carmel. He received his bachelor’s degree from Mercy College in 1986 and his law degree from Western Michigan University in 1989.

Gina Capone, who is running on the Democratic, Working Families and Women’s Equality Party lines, has been a town justice in Putnam Valley for 15 years and has served as vice president of the Putnam County Magistrate’s Association. In private practice since 1997, Capone earned a bachelor’s degree in criminal justice in 1990 from Pace University and her law degree from Pace in 1994.