The nation’s first president took the oath of office in 1789 on Wall Street in New York City, but further north along the Hudson, an earlier chapter of his life and influence on the American republic endures. 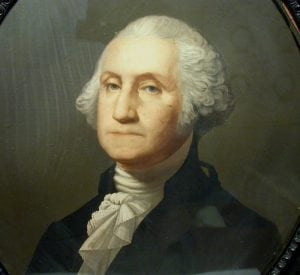 As commander in chief of the Continental Army during the Revolutionary War, Gen. George Washington established his headquarters and residence from April 1782 through August 1783 at the Newburgh family home of Jonathan and Tryntje Hasbrouck. The first publicly preserved historic site in the nation (1850), Washington’s Headquarters State Historic Site, which includes a stone house, museum and Tower of Victory, sits on a spacious corner lot in the city’s East End Historic District overlooking a spectacular stretch of the Hudson River. 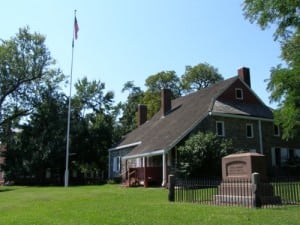 The museum located near the Hasbrouck House displays more than 1,300 objects. (Photo by M.A. Ebner)

A guided tour of the Dutch fieldstone farmhouse unveils the depth of heritage that the National Landmark preserves in the collection of Washington’s papers and effects as well as furnishings that reflect life during the period. The exhibit Unpacked & Rediscovered: Selections from Washington’s Headquarters’ Collection, which opened in 2012, displays more than 1,300 artifacts.

“In order to increase the number of objects we could show, we have minimal interpretation and labels,” Goldberg said. “We have a supplemental catalog that describes everything on display and shows multiple views of each object. It’s a searchable database.” 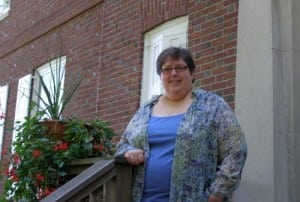 Museum visitors explore the collection on touchpads and search the database at a kiosk. Guided tours will appeal to  amateur historians as well as schoolchildren as they are led through rooms where Washington not only lived but made exacting decisions, including the rejection of a monarchy and the prevention of a government controlled by the military.

Washington generated a high volume of correspondence from the Hasbrouck House, and his Circular Letter of June 8, 1783, written at the end of the war, carries his powerful message of hope for his new nation.

For the past 18 years, Lynette Scherer has helped preserve Newburgh’s historical treasure on countless guided tours, and once visitors sign on with her to revisit the world of Washington, she delivers in detail.

“It took Washington’s men three weeks to reproduce 13 copies of his 4,000-word letter of June 8, 1783,” Scherer said as she led guests around the desks used by Washington’s Aide-de-Camp staff. “The letters would be delivered to the 13 state governors.” 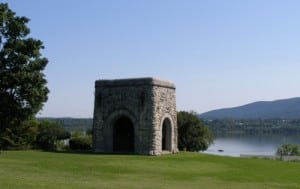 In addition to its military history, Washington’s Headquarters preserves the period’s furnishings, culinary traditions and architecture. The Hasbrouck House boasts high ceilings, designed to accommodate the 6-foot-4-inch Jonathan Hasbrouck. Outbuildings and guard stations added by Washington no longer stand, but a Tower of Victory built with native limestone was constructed near the headquarters in the late 19th century for the centennial of the war’s end. It is currently being restored.

Washington’s Headquarters has scheduled a number of events over the holidays. At 11:30 a.m. and 1 p.m. on Saturday, Nov. 26, a lecture and tour — “Through Different Lenses” — will use stereoscopic views to transport visitors back to Washington’s day. Admission is $5 per person.

On Sunday, Dec. 11, the public is invited to “Warm Up at the Washingtons” from noon to 4 p.m. The Salmagundi Consort will perform period music. There also will be warm cider and cookies by the fire. Admission is free as part of Newburgh’s Candlelight Tour of Houses.

Lot and street parking are available.

No photographs allowed inside.

Beyond military pieces, the museum displays an eclectic assortment of domestics, dolls, commemorative items of the Revolutionary period, as well as souvenirs collected from world travels. The permanent exhibit electronic catalog showcases the extensive collection of letters, illustrations, artifacts, and rare items such as the orders written by Washington for the Badge of Military Merit, the forerunner of the Purple Heart.

Washington’s Headquarters is located at 84 Liberty St. (at the corner of Washington and Liberty) in Newburgh. The suggested admission is $4 for adults and $3 for students and seniors ages 62 and older. Children ages 12 and younger are admitted free. Its winter hours, which begin Nov. 4, are 11 a.m. to 3 p.m. Friday and Saturday. Group tours can be arranged Tuesday through Saturday. Call 845-562-1195.