A historic and contentious election season is entering its final stretch, and the Dutchess and Putnam boards of elections have been running at full speed for weeks.

Working 14-hour days, including on weekends, election commissioners and their staff have been busy mailing absentee ballots and confirming registrations. And it’s not a matter of one or two people staying late at the office. As in all New York counties, Dutchess and Putnam each have a Republican and Democratic elections commissioner, as well as an equal number of staff members from both parties. This means that if one party shows up on a Saturday, the other party has to be there as well, as there is no step in the elections process — registration of new voters, administering absentee ballots, counting the votes — that is not simultaneously overseen by both a Republican and a Democrat.

A word to the wise: should you encounter a Board of Elections employee who has been operating on little sleep for the past month to ensure the sanctity of the electoral process: Don’t tell him or her, as Republican presidential candidate Donald Trump has declared, the election is “rigged.”

“What does that even mean?” asks Marco Caviglia, the Democratic elections commissioner for Dutchess County. (The Republican commissioner, Erik Haight, did not respond to an interview request.) According to Caviglia, the system is too complicated, with too many checks and balances overseen by both parties, for widespread manipulation.

“It’s like the rigging on a ship,” he said. “You have umpteen ropes everywhere so that the sails will work. So when you talk about the rigging, which one of all of these ropes are you talking about? If you talk about the media rigging it, or politicians setting up the rules that favor a certain candidate, that’s outside of our balloting.”

His colleagues at the Putnam County Board of Elections agree.

“It’s a lot of hype,” said Cathy Croft, the Democratic elections commissioner for Putnam County. Her Republican counterpart, Anthony Scannapieco, who has held the position for 28 years, said, “I can’t speak for anyplace but here, but Putnam County is fine.”

“When candidates start talking about rigging going on at polling places, it shows either a total ignorance or a total disregard for what we do,” said Caviglia.

The methods used to secure the validity of the vote go far beyond the major party oversight of each form and ballot that comes into the boards of elections in Poughkeepsie and Carmel. The parties work throughout the year to ensure voting rolls are accurate, including scouring local obituaries.

“We send a letter out before we remove someone from the rolls,” said Caviglia. “So if you get a letter from us telling you you’re dead, give us a call.”

All the commissioners interviewed stressed that even if a voter is not on the rolls, he or she can cast a “provisional ballot” to be examined after Election Day. The Putnam County board will have a judge at its Carmel office all day Nov. 8 so voters who claim they’ve been removed from the rolls in error can ask for a court order allowing them to vote.

“I always tell people that as long as you’re telling the truth, you have nothing to lose by talking to the judge,” said Croft. 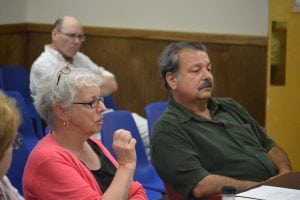 Once the polls close at 9 p.m., each voting machine prints the number of votes cast and for whom. Those results are read aloud to poll watchers who have been issued a certificate by their respective parties granting them the right to challenge votes.

“Most of the time they’re bored to death,” said Caviglia. Although Trump has called for his supporters to show up at polling places wearing red shirts to observe, “if you don’t have a certificate, you can’t hang around,” Caviglia said. “Those people will have no right to be there and they’ll be thrown out by the police.”

Once the votes are read aloud, the printed audits and the memory chip from each machine is removed, placed in a sealed pouch and delivered by courier to the boards of elections. Once delivered, the seals are checked for tampering and the officials note how long it takes for each delivery.

One year in Putnam County, the police were sent when a delivery didn’t arrive quickly enough. It turns out the courier, who was 86, had passed out in front of the Kent firehouse. “Fortunately the firefighters found him, and he was fine,” Scannapieco said.

On Oct. 26, the Democratic National Committee sued the Republican National Committee in federal court, charging that the RNC has supported Trump’s call for his supporters to be “watchers” at the polls. (An online effort encourages Trump supporters to show up en masse at polling places in red shirts.) The DNC accused the RNC of violating a decades-old consent decree in which it was forbidden from engaging in or encouraging “ballot security” campaigns designed to suppress voting.

When the pouches are opened, the memory chips are inserted into a computer to be tallied. The chips are then removed and inserted into a second computer in a different room and counted again, and then posted online. It’s the first time, at any point in the process, that results are placed on a device with an internet connection, making the system unhackable since it’s been backed up by printed reports and stored on an offline computer before then.

All the commissioners interviewed agreed that online balloting is not something that should happen anytime soon.

“There would be no paper trail,” said Croft. Caviglia, who used to work for IBM, agreed that it’s not worth the risk of convenience. “Anything you can possibly imagine doing, a hacker will have figured out how to do long before you even thought of it.”

The staff at the boards of elections will be working through the weekend and next week, including organizing rides to the polls or, as Scannapieco did one year, driving cross-county on Election Day to deliver a provisional ballot to a double-amputee veteran who couldn’t leave her home.

One thought on “Protecting the Vote in Putnam and Dutchess”