In 2011, a year after moving to Beacon from the Upper West Side with her husband, Katie Helmuth Martin started a blog about her new hometown. Unlike the vast majority of blogs, six years later A Little Beacon Blog (alittlebeaconblog.com), which covers the events and people of the growing city, is (1) still going, and (2) a viable business supported by advertising.

“Someone said they didn’t realize that Beacon needed or had a blog,” Helmuth Martin says, “But Beacon is so bloggable. There are businesses starting up and individuals making things. It’s really hard for me to shut off the story ideas.”

Her site has grown fast and receives about 8,700 page views per month. Most of her content is integrated with Facebook, which brings another 2,000 to 5,000 views weekly, as well as traffic from Twitter and Instagram. 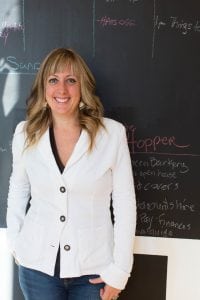 When Martin and her husband, David, moved to Beacon in 2010, the couple had one requirement: They had to be able to walk to a coffee shop. Main Street suited them perfectly.

Helmuth Martin, who was pregnant at the time, says she wanted to be self-employed because David commutes into New York as a location manager for film and TV. She had dabbled in TV and video production herself (Law & Order, a Li’l Kim video) but had online experience and so launched a website and production company and later a marketing and public relations firm called Tin Shingle. While attending classes at the Fashion Institute of Technology, she also made and sold jewelry accessories.

Humans of Beacon NY
Photos inspired by the photoblog Humans of New York.

Among the most-clicked features on A Little Beacon Blog is its “Things to Do in Beacon” guides, frequently updated compendiums of knowledge on everything from Second Saturday to where to get the best brunch to how to keep the children entertained. Her beauty and restaurant guides give detailed reviews and descriptions — whether about spa services on offer, what night is taco night, or where members of the Elks’ Lodge can get a discount. Curious about charity events or open-mic nights? She’s got that.

The blog also profiles the proprietors of popular businesses such as Alvin Bell, who opened a barber shop and beauty salon on Main Street more than 25 years ago. Helmuth Martin recently shared a DIY guide to gilding a pumpkin, thanks to master gilder Deborah Bigelow, and in May published a detailed guide to finding free parking in Beacon. She relies on a number of contributors, including production coordinator Marilyn Perez, designers Leigh Baumann and Allie Bopp, photographer Kristen Pratt and writers Catherine Sweet, Dylan Price and Brian PJ Cronin, who shares tips on family-friendly hiking and is also a reporter for The Current. 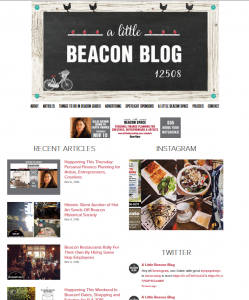 A recent home page of A Little Beacon Blog

Helmuth Martin moved her office this year into what she calls A Little Beacon Space, a bright street-level studio in the Telephone Building on Main Street, below Beahive. “After six years with the blog, I wanted office space for dimension, to have something you can touch,” she says. “Having space has been really neat.”

She’s used the space to host quickie morning exercise classes, a pop-up children’s haircut salon, parent/child yoga and as an event rental. “I feel now like I’m part of the community I’m blogging about, especially being on Main Street,” she says. For other upcoming events, such as a financial planning workshop for creatives and a holiday pop-up shop, see alittlebeaconblog.com/schedule.

Helmuth Martin says her curiosity about all things local drives A Little Beacon Blog. She has plans to write about historic buildings and quirky Beacon businesses. “I try to keep the wonder of when I moved to Beacon,” she says. “That kind of wonderment has given the blog its style. And I hope I never lose it.”

One thought on “A Little Beacon Blog”